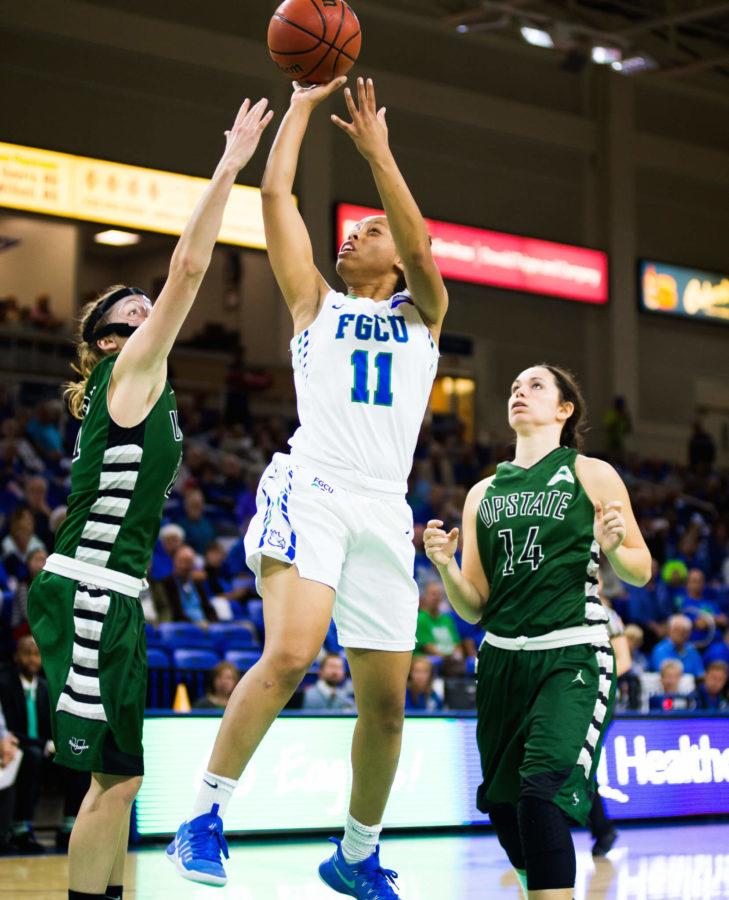 Following a 20-point victory over NJIT, the FGCU women’s basketball team defeated USC Upstate 93-43, earning its 10th straight victory while moving to 11-0 at Alico Arena this season.
Erica Nelson came out of the gate knocking down shots early, leading a quintet of FGCU double-figure scorers with 18 points, four rebounds and three assists.
Complementing Nelson’s 18-point finish, Jordin Alexander, Jessica Cattani and Haley Laughter each finished with 10 points while Gradinjan scored 11 in the Eagles’ 150th conference victory since becoming a member of the ASUN in 2007.
“In the first quarter, I thought USC Upstate came out really strong,” said head coach Karl Smesko. “They were getting some easy baskets on us. They were running their offense really well. Fortunately, we were scoring as well. Erica (Nelson) had a really big first quarter for us when we were trading baskets. She was hitting some threes and getting to the rim, getting some and ones, and really she was kind of what separated us in the first quarter.”
Scoring 10 points in the first five minutes of play, Nelson knocked down back-to-back threes before driving to the point with ease and finishing high-percentage buckets. The Spartans came out of the gate with aggression, trading buckets with the Eagles before FGCU held USC Upstate without a basket in the final 3:15 of the quarter while sparking a 13-0 run.
Starting the second quarter with a 12-point, 30-18 lead, the Eagles’ defense held the Spartans without a point for nine plus minutes, starting towards the end of the first quarter. Ending their offensive drought with baskets on back-to-back possessions, the Eagles continued to ride Nelson’s hot hand as she finished with 17 of her 18 points in the first half.
Taylor Gradinjan knocked down a floater in the dying moments of the second quarter to give the Eagles an 18-point, 45-27, lead heading into the break.
Coming out of the intermission, FGCU started to pull even further away from the Spartans, with Alexander’s three sparking a 12-2 run.  Shooting 45.5 percent from the clip and 40 percent from behind the arc in the third, the Eagles held a 68-32 lead heading into the final quarter of play.
Knocking down seven of their 13 shots from long-range in the second half, Tayler Goodall proved an instant spark off the bench for the Eagles, coming into the game draining three straight triples in the first minutes of the fourth quarter.
Allowing 18 points in the first seven minutes of the contest, the Eagle gave up only 19 points in the remaining 28 minutes, defeating the Spartans 93-43 to move to 5-0 in conference play.
FGCU will now face JU on Saturday, Jan. 28 at 4 p.m. at Alico Arena in a rematch of the 2016 ASUN tournament championship game where the Dolphins defeated the Eagles 56-54. The preseason favorites to win the conference, the Dolphins come into the match up against the Eagles sharing the top spot in the ASUN with a 5-0 record in conference play.
“I wouldn’t say they’re necessarily a rival now, but they did beat us and take away our chances at the NCAA (tournament),” Gradinjan said. “We want revenge in a way, but we are going to treat every game the same and try to win them all.”