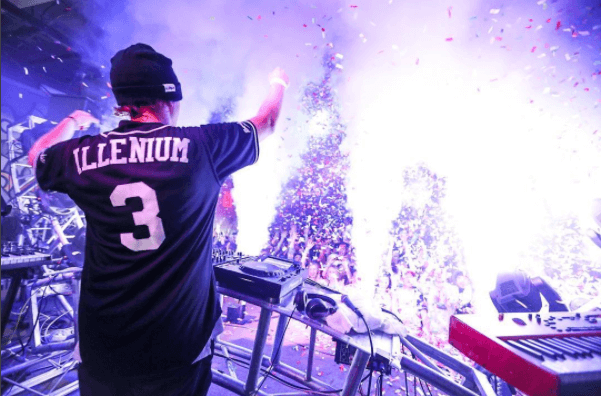 Illenium, who also goes by his given name, Nick Miller, is a DJ on the rise and has been turning heads in the electronic dance community with melodious beats and sets that take you on an emotional journey, making the listener want to cry one moment and then dance the next.
His nearest performance, Life In Color Miami, is sure to provide a set that’s no different.
“I’m hoping to bring a good balance of melodic, ‘feelsy’ music and tunes for people to just rage out to,” Miller said. “I love getting ‘feelsy’ but also loving seeing the crowd go nuts.”
The Denver-based DJ began his journey into music around four years ago, never having expected it to take him to the main stage. For him, making music is a cathartic process, one that’s become an integral part of his life.
When you see his name on set lists, the ‘N’ is replaced with a graphic of a phoenix, to represent rising up after a period of being down, a symbol that Miller says matches the music and experience he tries to cultivate.
“Throughout the years, my approach to making music is always changing,” Miller said. “I always like to start with the intro first. Right now I’m really digging guitar. I usually will start out making a guitar riff and just build on that.”
Miller is unique in the way that he creates electronic music that is surprisingly and refreshingly organic, incorporating very real sounding elements often inspired by nature.
“This really helps when then performing live because I can incorporate a bunch of live elements in the song and they all sound like they fit,” Miller said. “I love making the live performance more than just a DJ set. I want to keep expanding and adding more people and instruments to the stage.”
Later this year he hopes to have an album finished, and will soon release a single called “Fractures,” a song that’s warranted a great response amongst fans.
Miller’s enjoyed popular success with songs like “Say It (Remix),” and two originals, “It’s All On U” and “With You” among others.
With a packed touring schedule, including six tour dates in February alone, EDM and music fans alike are sure to be hearing much more of Illenium’s dreamy, melodious sound.