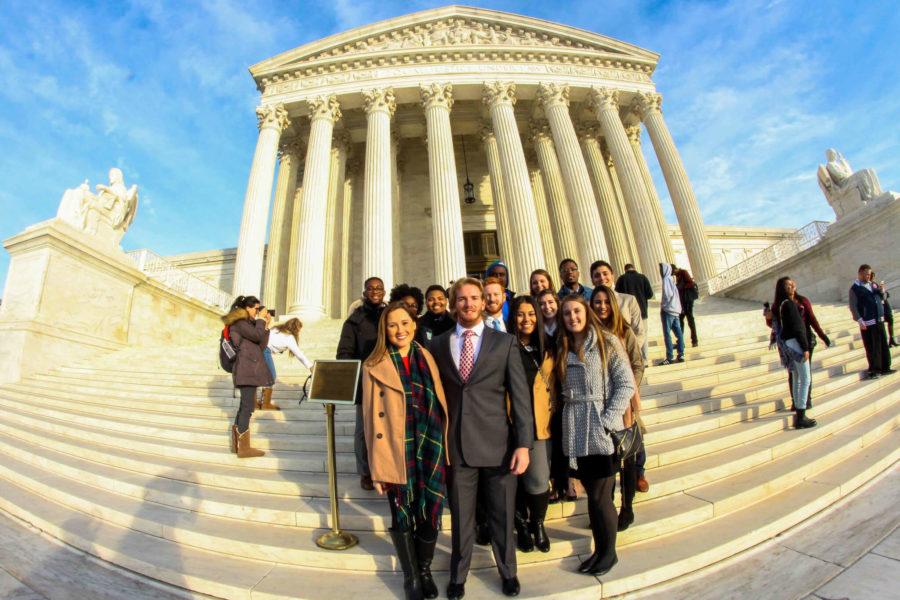 A group of 14 FGCU students were selected for the opportunity to attend the presidential inauguration in Washington D.C. thanks to sponsorship from the Brunson Foundation and Rep. Byron Donalds from Naples.

The students boarded the bus at FGCU at 3 p.m. Wednesday, Jan. 18, and after picking up students from Florida SouthWestern College and Ave Maria as well as waiting for the two high school students selected from each public school in Collier and Lee County, the students arrived in D.C. the following day at 10 a.m.

“If I could summarize the trip in two words, it would be exhilarating and exhausting,” said Emmalyn Green.

Green is the vice president of SG on campus. She, along with many of her colleagues on the trip, expressed sentiments that they, in particular, appreciated the opportunity to see the federal government up close.

“I’ve never experienced history to that degree,” Green said, “and as someone who studies history and the political process, it was absolutely incredible to live through it and experience it firsthand.”

The students were all openly appreciative, though each noted the lack of communication between the trip organizers and their group to be harshly lacking. That is why, on the night before the inauguration, SG Treasurer Ivan Rodriguez called in a favor to his cousin who worked in the House of Representatives.

The group had just been informed they were without tickets and were expected to go in as the general public at the back of the National Mall. Rodriguez was having none of that, and within a half hour, his cousin arrived with tickets for the standing area in front of the Capitol Building, courtesy of Rep. Derek Kilmer (D-WA).

At 3 a.m. the next morning, the group woke up an hour and a half outside of the city in Fredericksburg, Virginia where they took cramped Ubers to the nearest Metro station and headed to Capitol Hill.

There they stood for seven hours in the 40-degree weather, huddled together under the gray, drizzling sky above.

Throughout the inauguration ceremony, Ashley Sambrun, the chief justice of SG, vocalized her concerns — and more importantly, her love for the Obamas — despite the confused or even disgusted looks it got her from those around her.

“The main thing that surprised me at the inauguration was the type of people that were there surrounding the capitol,” Sambrun said. “The minute they would see a Democrat, they would just throw out a disrespectful remark. I mean, I understand they don’t have the same political views but, at least, show some amount of respect.”

Sambrun’s colleague, Rodriguez, instead seemed surprised it had only been some comments at the inauguration.

“The environment was a lot different than what I expected,” Rodriguez said. “Media shows you one thing. I don’t know if it’s because of all the rallying is done and he’s finally been elected or what, but for a majority of it, it was quite peaceful.”

Rodriguez, who is Puerto Rican, did note that he felt some took it too far, in particular, about immigration from Latin America.

“I heard some chanting from the Mall,” Rodriguez said. “I heard them chanting back there, ‘Build that wall,’ which is, I feel, a little inconsiderate, you know? I have a lot of friends that are here with visas that are from Mexico.”

Despite those moments, Green said attending the ceremony was an overall positive experience.

“The inauguration solidified my support of the quote ‘I hope Donald Trump is a good president. Wanting him to fail is like wanting the pilot to crash the plane that we are all on,’” Green said.

In his first address as commander-in-chief, Trump left off on a note of unity for the nation, which resonated with many of the students in attendance.

“As long as he has his head on right and follows through with his promises he mentioned — you know, helping people get off welfare by creating new jobs for them so that way they can actually make a living on their own, all that — I’m all for it,” Rodriguez said. “So, I really hope he can help unite us rather than divide us further.”

The following day, the students were given an agenda to tour the national monuments without specific times or places and though many were still blocked off or obstructed due to the inauguration or the Women’s March on Washington, which was occurring as the students arrived in the city.

“We are not here for the women’s march,” event coordinator Anthony Thomas told the bus full of college students before they were allowed off. “It is a liability.”

The FGCU students at the back of the bus all exchanged glances — one whispering loud enough for the others to hear, “We’re adults.”

And, just like that, the group was off and walking along Independence Avenue with the mass of half a million others who had come to the capital for the march.

“One of my favorite parts of the trip was being in the women’s march,” Sambrun said. “It really made me realize my role as a woman and that I deserve the choice to do what I want with my life. It was very liberating in my perspective.”

Student Body President Thieldens Elneus said, for him, the women’s march was the highlight of the trip.

“Being able to join our nation to stand up for women was priceless,” Elneus said. “I did not expect that so many people would be in attendance.”

Though not every FGCU student on the trip was in support of Trump, Elneus said the experience of being there in person was worth it, partisanship aside.

“Regardless of political leaning, this trip was a once in a lifetime type of experience,” Elneus said. “If anyone is able to attend an inauguration, they definitely should. Experiencing the transition of power with people from all over the nation and witnessing several previous presidents on the same stage was well worth being there in person.”