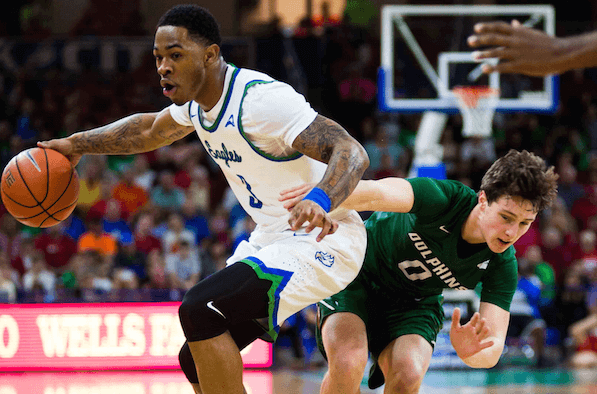 Coming off of its nail-biting victory over UNF, the FGCU men’s basketball team claimed sole possession of first place in the ASUN, defeating JU 78-56.
“I thought it was a little bit of a slow-paced beginning,” FGCU head coach Joe Dooley said. “We did a good job of sort of withstanding the run with them making nine threes. In the second half obviously we got going a little bit and Meech (Demetris Morant) was terrific and I thought Brandon (Goodwin) got us going.”
It was the Demetris Morant and Brandon Goodwin show at Alico Arena, as the duo combined for 41 of FGCU’s 78 points en route to the Eagles 17th victory of the season.
Tying his career-high rebound total with 17, Morant threw down eight dunks en route to finishing with a career-high 25 points on 11-14, shooting from the clip.
“Like I said, I’m more of a defensive player,” Morant said. “Coming into the game I didn’t think I was gonna get 25 points off of pretty much all dunks but thanks to my point guards they look for me and I finish for them.”
Throwing lobs to Morant thought the entire contest, Goodwin dished out a game-high seven assists, finishing with 16 points as the Eagles finished with a season-high against a DI opponent 52 points in the paint.
“I know especially when I drive, his man is going to step up or he’s going to stay back but when he steps up I just throw it up there,” Goodwin said. “There’s not a pass I don’t think that he can’t catch. If you put it over the rim for him he’ll get, he’s the most athletic big I ever played with.”
In a first half that saw six ties and 10 lead changes, JU got off to a hot start from downtown courtesy of Cody Helgeland’s quick three shots from long range in the first nine minutes of action.
Finding high-percentage buckets against a Dolphins defense that defended whoever had possession of the ball with two to three players at a time, the Eagles found themselves all knotted up at 21 with JU despite shooting zero percent from downtown, opposed to the Dolphins’ 50 percent.
Despite the Eagles going on an 8-3 run before the half and shooting 50 percent from the clip in the first half, the Dolphins shook off a 38.5 shooting percentage from the field with 50 percent shooting from long range to only trail 36-33 at the half.
Finishing the first half with 12 points and six rebounds, Morant claimed his double-double in the opening minutes of the second half as the Eagles sparked a 12-3 run.
The Morant and Goodwin show had the 4,402 fans at Alico Arena on their feet as Goodwin continued to find Morant for alley-oop jams as FGCU began to pull away from JU.
Holding the Dolphins without a basket for 4:11 while leading the Dolphins 70-50 with 3:52 left to play, Kevin Mickle came off the bench and provided a spark on defense for the Eagles as they held onto their lead to defeat JU 78-56.
With a 6-1 record in conference play, FGCU will host UNF on Monday, Jan. 30 at 7 p.m. at Alico Arena before facing JU again on the road on Saturday, Feb. 4.