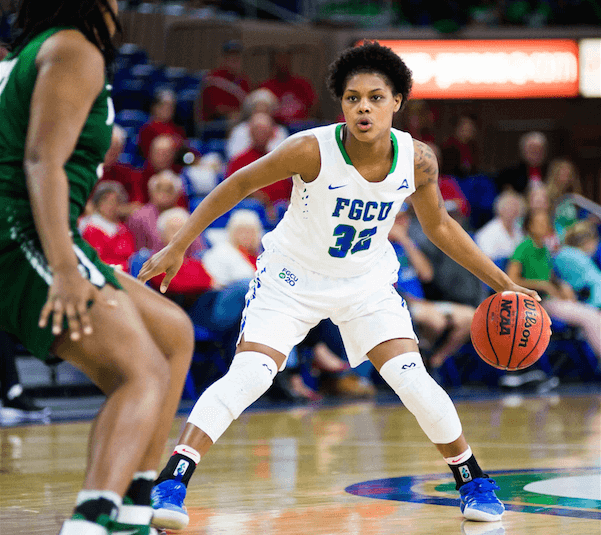 Seeking to avenge the ASUN tournament championship loss that kept them out of the NCAA tournament, the FGCU women’s basketball team defeated JU 60-57 to claim sole possession of first place in the ASUN.
In a game with 12 lead changes and 11 ties, the battle of conference unbeaten came down to the wire until the last minute of play.
“I thought it was a tight game the entire way,” FGCU head coach Karl Smesko said. “The entire game was just back and forth back and forth and fortunately we had the lead in the last minute and they had to foul us. Really we just made one more play than they did today so [sic] very fortunate to get out of here with a win today.”
Following a layup by Kayla Gordon to bring the Dolphins within one, 54-53, with 1:19 remaining in the fourth, Erica Nelson put her head down and drove to the hoop to give the Eagles a lead they would hold for the final 49.8 seconds of the game.
“We got to about 13 and I saw nothing happening and I was just about to call a timeout,” Smesko said. “I decided just to hold on to it because we didn’t know how the last minute would play out, and I didn’t want to be stuck without any but it was just a really tough shot over somebody and we were fortunate it went in.”
On the ensuing possession, JU missed their initial shot and grabbed an offense rebound, but Taylor Gradinjan swiped the ball a-way from Gordon and passed the ball to Nelson, who got fouled and went from the line to give FGCU a 58-53 lead.
Following Gordon’s 2-2 trip from the line, Jordin Alexander put the final nail in the coffin going 2-2 from the charity stripe to give the Eagles a 60-55 lead with 14 seconds remaining.
The Dolphins would make a layup, leaving three seconds on the clock but it was too little too late, as FGCU snapped JU’s seven-game win streak and moved to 6-0 in conference play.
Leading the way on offense for the Eagles in their 11th-straight victory, Rosemarie Julien finished with 18 points and four rebounds.
Joining Julien in double figures, Nelson finished with 15 and Jordin Alexander finished with 11 as the Eagles moved to 12-0 at home.
Alexander played a season-high 38 minutes, locking down the Dolphin’s leading scorer, Sherranda Reddick. Entering the contest averaging 18.3 points per game, Alexander held her to just eight points.
Facing UNF in Jacksonville in its next contest on Saturday, Feb. 2 at 7 p.m., FGCU will face JU once again on Monday, Feb. 4 at 1 p.m.