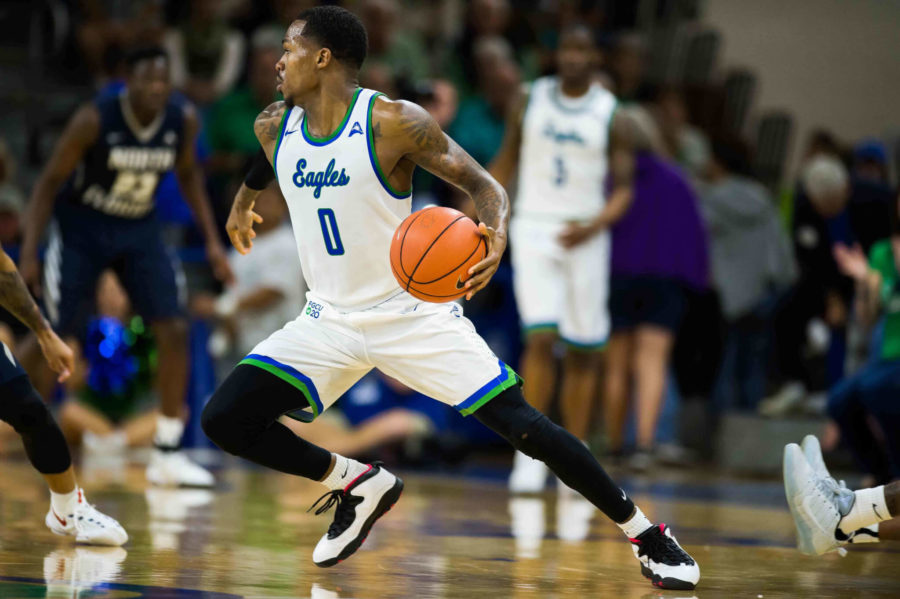 Facing this team just a week ago on the road where they defeated UNF 86-82 thanks to Brandon Goodwin’s game-winner, the FGCU men’s basketball team rode another hot performance from Goodwin en route to its 74-59 victory over UNF.
Moving to 7-1 in ASUN play sitting atop the standings, the Goodwin and Demetris Morant show was in full affect in front of the 4,107 fans at Alico Arena, as the duo combined for 43 points.
Scoring 21 of his 29 points in the first half, Goodwin put the team on his back in the first, knocking down three shots from behind the arc while grabbing seven rebounds and dishing out four assists.
“He’s a pro,” UNF head coach Matthew Driscoll said. “He’s got a pro’s mentality because he’s not afraid of the moment and he’s not afraid of what’s in front of him. I’ve coached lotteries; I’ve coached NBA guys like Joe (Dooley) and I’ve been at the high-major, so he’s a pro.”
Coming off of his dunk-fest against JU, Morant notched his second straight double-double and his sixth of the season with his 14-point, 13-rebound performance.
Following a 0-7 start from the clip in the first half, Zach Johnson erupted in the second half to propel the Eagles past the Ospreys, scoring 16 points on 4-9 shooting while going a perfect 8-8 from the charity stripe.
Playing a career-high 30 minutes, Kevin Mickle’s defensive expertise was a huge benefactor in the Eagles’ victory, locking down the perimeter while helping limit UNF’s leading scorer, Dallas Moore, to 17 points.
“I thought that we had some stretches where we played really well,” FGCU head coach Joe Dooley said. “Brandon obviously in the first half kept us in there scoring, and then Zach had some downhill drives in the second half and those got us going. Once again I thought Kevin Mickle gave us some great minutes, especially defensively.”
Flying out the gate, the Eagles went on a 9-0 run before the Ospreys went on an 8-0 run of their own. Battling back and forth with Dallas Moore’s hot start on offense, Morant and Goodwin combined for all 18 of the Eagles points as they lead 18-11 with 11:32 to go.
Having its lead cut to one, 23-22, FGCU went on a major cold spell during a 6:13 span following a short-lived UNF lead. Closing out the half with 21 points, Goodwin and Moore seemed to be engaged in a shootout following Moore’s 15-point first half as the Eagles lead at the intermission 34-32.
Coming into the second half 11-0 this season while leading at the half, Goodwin, Morant and Johnson sparked a 19-3 run in the second half to start pulling away from the Ospreys. After allowing Moore to score 15 in the first half, the Eagles limited him to just two in the second.
Shooting 51.9 percent from the clip in the first half behind a strong second half from Johnson, the Eagles moved to 12-0 this season when leading at the half and 62-4 when leading at the half under Dooley, sweeping the regular-season series against UNF for the first time since 2014.
FGCU will now hit the road to face JU for the second time in the last week, after defeating them 78-56 on Saturday, Jan. 28, on Saturday, Feb. 4 at 7 p.m. in Jacksonville.
“We got them the first time, and I know they’re gonna [sic] game plan and be ready to play,” Goodwin said. “We gotta [sic] tighten up on a few things and be ready to guard. That’s our main focus is defense and getting on the glass and definitely keeping our turnovers down.”