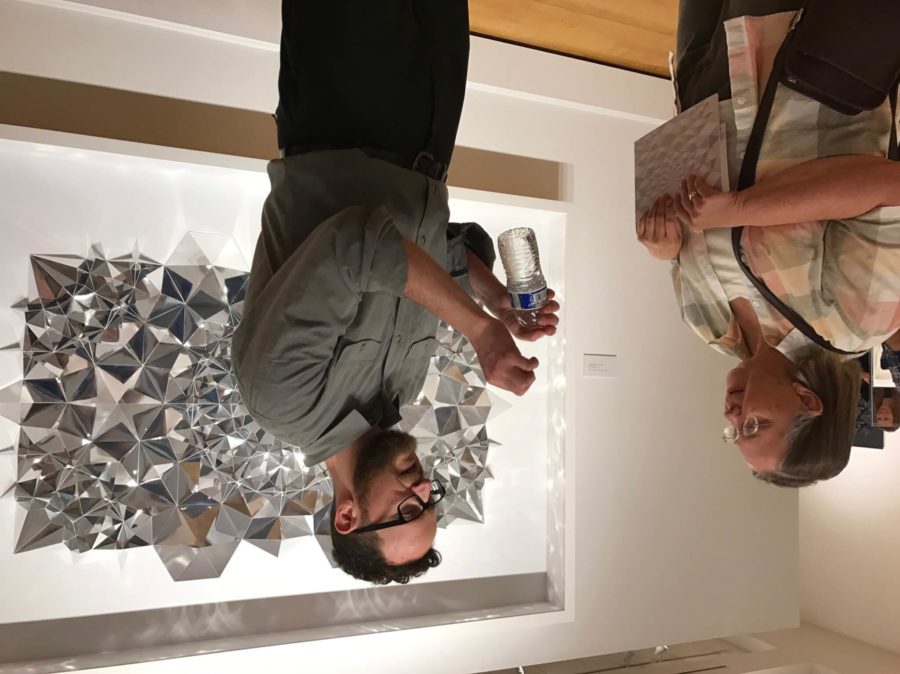 The pieces have been folded over and over again and placed on various walls around the room. No, it isn’t an elaborate prank or an act of vandalism -— this is the Arts Complex’s newest exhibit.

Matthew Shlian, who works as a paper engineer in Michigan, unveiled his latest exhibit on Thursday, Jan. 26 in the Arts Complex.

Shlian was showing pieces of his work at the Thomas Riley Studio in Naples when he was approached to work with FGCU.

He then began serving as an Artist-in-Residence, where the university pairs artists with scientists who then work with students.

The evening began with an Artist’s Talk in the U. Tobe Recital Hall of the Bower School of Music building.

There, Shlian explained the beginnings of his work, and those who inspire him, from movie set designers to pop-up book creators.

During the talk, Shlian passed around a few of his portable sculptures for the audience to touch.

One was an accordion-like piece with intricate cuts on the sides, which was stretched and examined by a full audience.

After the talk, attendees filed into the Arts Complex’s Main Gallery to view Shlian’s pieces -— a collection of monochromatic sculptures, both folded and cut from paper.

“I don’t know, it’s like choosing a favorite child,” Shlian said when asked what his favorite piece in the exhibit is. “I’m happy with in general how it all came together, this is seven or eight years worth of work kind of cumulated and curated.”

Emily Gonzalez, a junior art major, went because it was required for her environmental art class.

“I think it’s amazing,” Gonzalez said. “I saw the talk and it was really inspiring.”

Gonzalez enjoyed the layering and the depth of Shlian’s work.

Babette and Marc Weksler, a couple who live in Bonita Springs for a portion of the year and have attended other FGCU art gallery events in the past.

They enjoyed the exhibits because to them, it represented the opposite of what they do for a living.

“It’s sort of backwards with regard to what we do,” Marc said. “We’re in medicine, so we sort of say ‘what’s your problem, we’ll get the solution,’ he makes a problem and says ‘you find something that we can do with it.’ It’s really quite interesting.”

At one point in the night, Marc spoke to Shlian, and found his personality different from other artists.

“His personality is just wonderful,” Marc said. “He’s not snooty, he’s not too withdrawn, he’s a pretty unusual person.”

Babette enjoyed Shlian and his work because “he’s gotten into so many different wonderful areas.”

“He’s open to all kinds of things, which is very refreshing,” Babette said.

For Shlian, inspiration is found all over.

“I think artists walk around all the time with their eyes open,” Shlian said. “I might hear a song or I might see something in nature, it’s everything, science, architecture.”

As for the future, Shlian’s work won’t stop at FGCU.

“I am working with the head of Alzheimer’s research, Dr. Henry Paulson in March on a project,” Shlian said.

Shlian will also be doing a series of prints with the Tamarind Institute in Albuquerque, New Mexico.

For those who want more out of  “Matthew Shlian: Telemetry,” they will have an opportunity to attend “Reflections on Telemetry,” a live

performance piece in response to the exhibit composed of students from professor Dan Bacalzo’s devising performance course, on Wednesday, Feb.