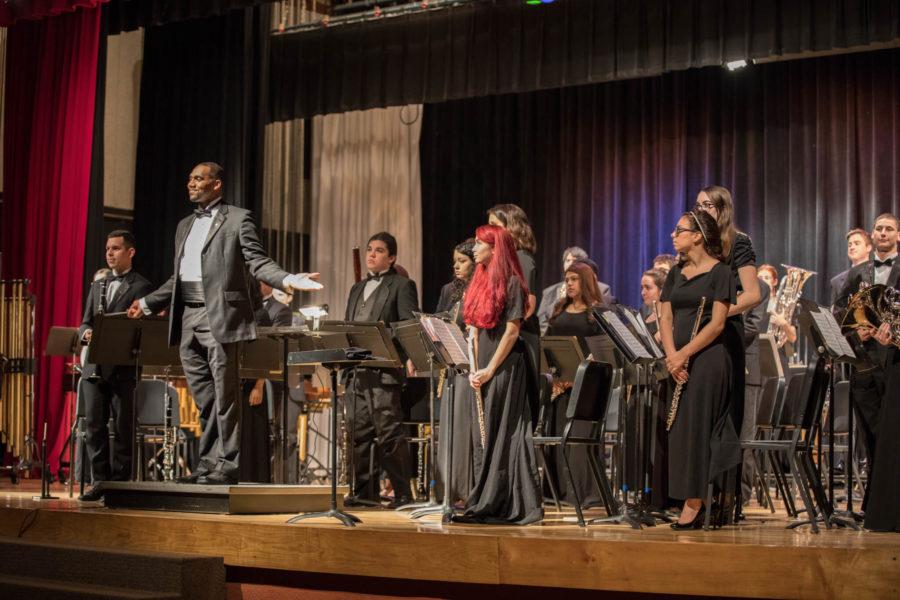 Conductor Troy Jones speaks to the audience during the afternoon performance at Estero High School, which was free to the public. (EN Photo / Kim Smith)

The Symphonic Band, conducted by Assistant Director of Bands Troy Jones, performed numerous Irish-influenced works, including “Kirkpatrick Fanfare” (1999) by Andrew Boysen, “Blackwater” (2005) by Timothy Reynish, “Their Blossoms Down” (2002) by Samuel Hazo, “A Longford Legend” (1996) by Robert Sheldon and “The Jig is Up” (1970) by Daniel Kallman.

After a brief intermission, the Wind Orchestra, conducted by Associate Professor of Music Rod Chesnutt, performed “Instinctive Travels” (2009) by Michael Markowski and “Symphony No. 2, Voices” (2016) by James Stepherson.

The Bower School of Music is celebrating a decade of music through all of its events this year, including the Sunday performance at Estero High School. The afternoon concert was free of charge to the local community.

“A Longford Legend” was based on Sheldon’s impressions of three poems in a collection of 18th century Irish ballads. It is written as a tribute to the music of Percy Grainger, Gustav Holst and Ralph Vaughn-Williams. Irish folk tales influenced the piece. Three different melodic parts per each poem, a complex form and colorful texture bring the piece to life.

Notes written by Stephenson on his piece explained that “Symphony No. 2, Voices” was influenced largely on the variability of the human voice.

“They come in so many forms,” Stephenson wrote. “Some high, some low. Extremely loud, or extremely soft. Some are menacing or angelic. A voice is completely unique to each individual and instantly recognizable to a close friend or relative.”

Future Bower School of Music events in February include Peruvian Pianist  on Feb. 9, Love Songs and Duets in Honor of St. Valentine on Feb. 11, Jazz Piano and Guitar on Feb. 16,  Symphony Orchestra on Feb. 19 and the Italian pianist from Japan, Giuseppe Mariotti, on Feb. 24.