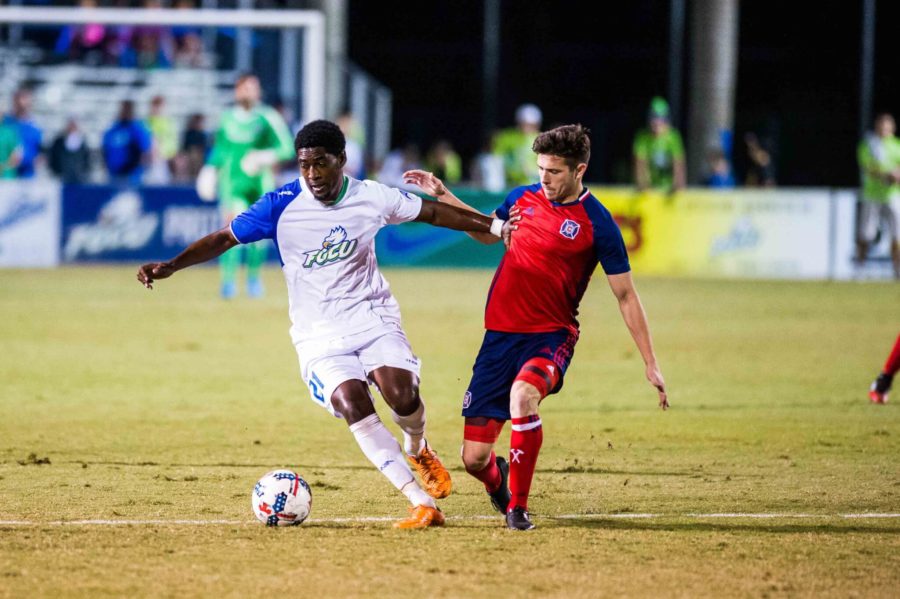 From flurries and 40s to sun and 70s, FGCU will welcome another MLS team for the second consecutive season. The MLS team, Chicago Fire, has ventured its way down to Southwest Florida as part of its 2017 spring preseason training.

With better weather conditions and the ability to play on grass versus turf, the Fire has an ample amount of training opportunities at the FGCU Soccer Complex.

“It’s way better than training inside in Chicago on turf,” midfielder Drew Conner said. “It’s definitely a professional level pitch here. I played college soccer for four years, and I’ve been to a lot of fields. And, there’s not many fields that are better than this one.”

Aside from the field, the weather also plays a huge role in the training results for the team.

“The weather is nice all year-round,” goalkeeper Stefan Cleveland said. “It gets pretty hot in the summer, but it makes for a good training atmosphere throughout the winter months.”

Outside of Florida, FGCU may seem like a small, up-and-coming school; however, with the recent turnaround for the Fire, the team was left with many new faces.

Yet, this new and younger team brought more than its skill, it also brought previous memories of FGCU — from reading about our nationally recognized team or even playing against the Eagles at home.

“I went to University of Wisconsin, and we had two games down in Florida my sophomore year in 2013. And, one of our games was against Florida Gulf Coast,” Conner said. “So, I’ve been to the field before – practiced at it once and played a game there.”

Whether or not a player has been to FGCU, with the recent acknowledgment of FGCU, specifically the men’s soccer team, it would be hard for someone who plays the sport to not know of the Eagles.

“I remember you guys had a very good striker (Albert Ruiz), so I heard about him throughout the season because I was at Louisville this past season,” Cleveland said. “This school is definitely on the radar.”

Those who share the same passion for this sport also have the opportunity to be a part of the Fire, even when the pro-team is off during its regular season.

With youth teams all over the country, one being here in Southwest Florida, the Fire hopes to inspire those looking to make it to the major league in their future.

“We have headquarters down here in Florida for Chicago Fire Juniors,”  Conner said. “The Fire pro-team has all of the youth teams set out all over the country, and the goal is to pick the best kids from each youth team.”

If the organization thinks players have pro-potential, the Fire will bring them into Chicago to play with the team. Conner can relate personally, as that was how he was brought up to the league.

From Illinois all the way to FGCU in Southwest Florida, the Chicago Fire is bringing the heat back to the city in preparation for its 2017 MLS season, which starts March 4 against Columbus Crew SC at Mapfre Stadium in Columbus.