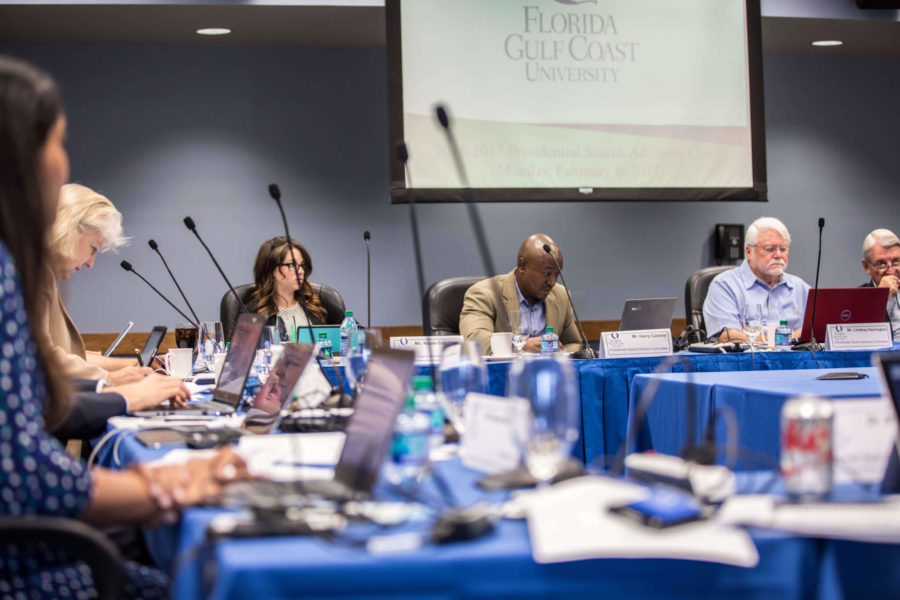 Ten candidates have been selected by FGCU’s Presidential Search Advisory Committee to advance in next week’s interview process in pursuit of President Wilson Bradshaw’s replacement.

The PSAC held a meeting Monday, Feb. 6 in the Cohen Center where candidates were selected for on campus interviews.

Grady was met with some vocal criticism by PSAC members. According to PSAC member Sharon Isern, of 137 faculty members 88 percent voted against Grady.

“He is probably the most negatively received candidate and some issues and concerns are that he is coming in with very fixed ideas,” said PSAC member Madelyn Isaacs.

Both FGCU’s Board of Trustees and the PSAC are responsible for searching and selecting a new president in response to Bradshaw’s retirement in June 2017.

The PSAC is tasked with processing and choosing a minimum of 3 qualified candidates to the BOT, which, in turn, will chose a new president. The process is lengthy involving interviews, meetings and forums.

The PSAC will conduct interviews on Wednesday, Feb. 15 and Thursday, Feb. 16 and finalists will then participate in a forum on Feb. 22 to 23.

FGCU’s provost and vice president for Academic Affairs, Ron Toll, applied for the FGCU’s presidency back in January and did not receive enough votes to become a top ten finalist despite PSAC support.

“Dr. Toll has the best knowledge of FGCU and its inner workings and all of its different moving parts,” Sub-Committee Chair of the PSAC Robert Gregerson said. “Of all of our candidates he understands the institution best of all them.”

Daniel Heimmermann, provost and Vice President for Academic Affairs at the University of Texas of the Permian Basin, has already advanced to the BOT satisfying the PSAC’s requirements.

A schedule for candidate interviews will be released and updated as Witt/Keiffer decides specific interview times for candidates.

The new president will be chosen on Feb. 28 at the Board of Trustees meeting.