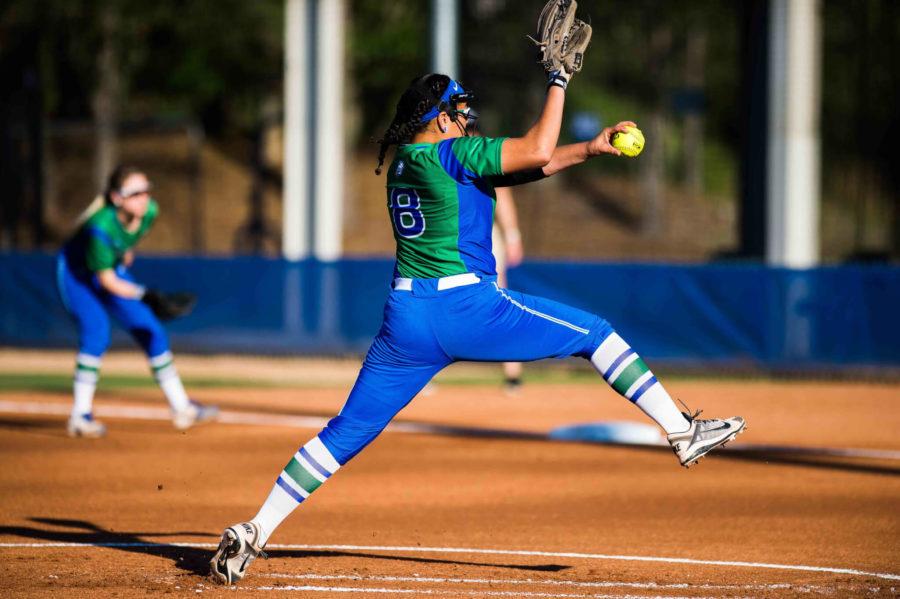 Opening the 2017 campaign hosting the FGCU Kickoff Classic, the FGCU softball team went a perfect 4-0 over the weekend defeating LIU-Brooklyn 7-0 and 8-0 on Friday, Feb. 10 and 9-1 and 8-0 on Saturday, Feb. 11.
Originally slated to face-off against UConn to go along with their contest against the Blackbirds, the Huskies were unable to fly out of the area due to limited travel out of the northeast.
Due to UConn’s inability to make it to the classic, FGCU and LIU-Brooklyn competed in back-to-back doubleheaders on Friday and Saturday instead of participating in a three-day tournament.
“What’s really exciting for me over the past two days is we were able to use just about everyone on our roster in some sort of role,” said FGCU head coach David Deiros. “The way they stepped up, in some cases in roles they hadn’t practiced a lot, is really exciting for us to see as a staff. We’re ready to go to Mexico and take that versatility on the road.”
Defeating LIU-Brooklyn by a combined score of 32-1, the Eagles defeated the Blackbirds in run rule fashion three times over the span of two days, ending their first run rule victory in just five innings, while they rounded out the rest of their run rule victories in six innings.
Splitting their time in the circle in both double headers, preseason ASUN pitcher of the year Riley Randolph and Taylor Wade moved to 2-0 on the season.
Pitching in game one of both weekend doubleheaders, Randolph pitched a complete game shutout on Friday, allowing two hits and striking out five batters en route to the Eagles 7-0 victory.
Getting things rolling in the circle again on Saturday, Randolph pitched another complete game, allowing one run on seven hits, striking out one batter, and forcing eight ground outs in FGCU’s 9-1 run-rule victory over the Blackbirds.
Closing out both games of the doubleheaders, Wade followed Randolph’s complete game shutout with one of her own, allowing four hits and striking out six batters in the Eagles 8-0 victory on Friday.
Starting off in the circle for FGCU’s final game of the weekend, Wade pitched five innings before Gabee Draney closed things out for the Eagles, allowing three hits and striking out three batters in the Eagles final 8-0 victory.
On offense, preseason ASUN Player of the Year Raquel Fournet and preseason ASUN all-conference team pick Kelsey Huff led the bats for FGCU in what was a dominant showing at the plate for the Eagles.
Heading up to bat 9 times over the weekend, Fournet went a combined 5-9 from the plate, knocking in six rbis, five hits and three doubles despite being walked four times.
Stepping up to the plate 14 times over the weekend, Huff went a combined 9-14 from the plate, knocking in six rbis, nine hits, two doubles and one triple while stealing two bases as FGCU moved to 4-0 on the season.
The Eagles will now head to Puerto Vallarta, Mexico to participate in the Triple Crown Sports Puerto Vallarta Challenge from Thursday, Feb. 16 to Saturday Feb. 18. They will face off against Fresno State, Texas Tech, Cal State Fullerton and Mississippi State.