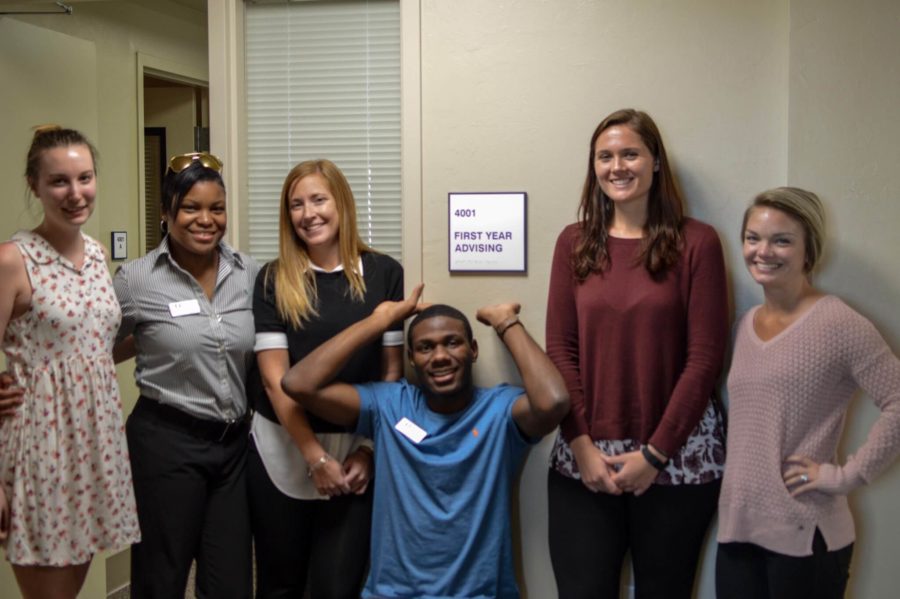 First Year Advising in Eagle Hall works to make sure students are on track to graduate on time. (EN Photo / Molly McGunnigle)

We’re lucky to attend a university like FGCU where the faculty and professors actually care about students as individuals. They’re happy that we chose to attend this school, but that doesn’t mean they want us here forever.

Up in Tallahassee, politicians and university administrators are working to make sure that students aren’t here any longer than they need to be.

This past Wednesday, the Florida Excellence in Higher Education Act passed through a subcommittee of the state senate. The all-that-glitters-isn’t-gold sounding name is  the latest attempt to push students to graduate within four years.

The bill would require all public Florida universities to adopt a flat tuition rate by 2018. Essentially, students would pay tuition based on a set credit schedule, regardless of how many credits they actually enrolled in.

For some students, this proposal could mean savings. Sophomore legal studies major Victoria SanFilippo is currently enrolled in 17 credit hours.

“I believe the idea is a great initiative because it may provide greater incentives to students to graduate on time, lessening the burden of credit expenses. On-time or even accelerated graduation rates allow for young people to start their careers as soon as possible, which will ultimately benefit both students and the state,” SanFilippo stated.

For others, the proposal represents a financial burden.

“I think people enrolled in less credit hours aren’t going to like it,” freshman health science major Vanessa Knoch told me. “I do think it would make students take more credits per semester to graduate on time.”

The proposed plans leaves some finer details up to the schools. Such details include the cost of summer terms, rates for part-time students, price differences for out-of-state students and whether or not to include the fees in the pricing.

“My main concern would be whether or not it would affect the financial aid that I receive,” freshman political science major Lambrit Johnson said.

Whether or not students will be incentivized to graduate faster is yet to be seen; however, this isn’t the only incentive that our university is giving students to speed up graduation.

FGCU’s new “Soar In 4” initiative is offering a tuition rebate to students who meet a number of requirements. The goal is to have students graduate with their baccalaureate degrees in four years or less.

Students starting summer 2015 or later who meet the requirements will be eligible to receive up to 30 credits of out-of-pocket tuition in rebate money.

“I really like the incentive because it rewards students for doing what they’re here to do,” freshman bioengineering major Billy Glenn said. “The fact that students are getting jobs in Florida is cool too, because the local and state economies benefit from their students.”

Money talks, especially to college students. I’m sure we’re all used to hearing students complain about how expensive college is and how broke they are. This financial motivation to graduate on time is definitely a step towards making college more affordable.

Another of FGCU’s recent incentives, the 3/2 Withdrawal Limit Rule, isn’t as happily received around campus.

The rule, which was approved very quietly, holds that students can now only withdraw from three lower level and two upper level courses without penalty. Any further withdrawals will result in a “WF” on the students’ transcripts, also penalizing their GPA’s.

While the rule shouldn’t affect too many students, the possibility of being academically punished for withdrawing after one week of a course doesn’t sit well.

“It gives students the incentive to only take classes they actually plan on completing, which is important for classes with limited seating. It also encourages students to finish what they start and work hard rather than giving up on a course,” junior psychology major Katie Moran explained.

FGCU’s six-year graduation rate for 2015 was 42.9 percent. Whether positive or negative, the incentives being put in place by the university and state officials aren’t unwarranted.

The whole purpose behind four-year universities is to get students their degrees in four years. It’s easy to see why those in charge are working on possible options to get students out on time.

We love our school, but we shouldn’t be here any longer than we  need to be. As much as our school loves us, it surely doesn’t want us hanging around forever. Sometimes the best way to get an eagle to soar is simply to give it a little push out of the nest.