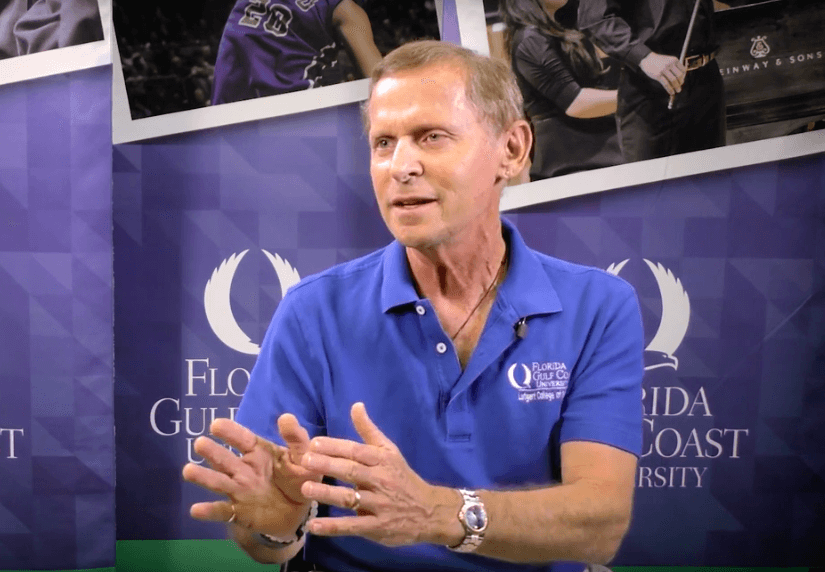 (Screenshot courtesy of FGCU at 20)

FGCU first opened its doors on Aug. 25, 1997, led by a group of pioneering faculty who laid the foundation for what FGCU would become.

These first professors and staff members came from all different places but were united in an effort to build the university from the ground up. Twenty years later, some of those professors are continuing to have an impact on FGCU today and can attest to how much the university has grown in its two decades of existence.

“FGCU was 750 acres of mostly wild land — for example, a family of wild pigs hung out sometimes off FGCU Boulevard. There were only a few scattered buildings,” said Myra Mendible, cofounder of the FGCU English Program.

FGCU’s geography has grown significantly since 1997, now encompassing 39 residential buildings and just under 15,000 students, a tremendous increase from the 81 students in FGCU’s first graduating class.

“In the early years, there was an intense sense of camaraderie among the faculty and staff that we were all part of something new … it appeared that anything was possible,” Rubens said.

Founding professors spoke of the costs and benefits that have accompanied FGCU’s advancements. With such an increase in student enrollment, the university has had to adjust to a larger student body with different dynamics than the group that established FGCU.

“Everything is changed,” said Madelyn Isaacs, founder of the FGCU School and Mental Health Counseling Program. “Twenty years ago, we were long on hope and vision and very short on time, resources and infrastructure. Our growth has been a gift, but we have lost the momentum of closeness.”

In an email, Rubens said that the FGCU community has changed vastly over the years.

“The changes we have seen over the years are natural changes that are part of the evolution of FGCU,” Ruben said. “One can miss the smallness and sense of community … but it is replaced with a stimulating environment whose borders and influence have gone well beyond the five-county area.”

In addition to reflecting on FGCU’s past for the university’s upcoming 20th anniversary, founding faculty looked toward the future and spoke of what they would like to see on FGCU’s horizon.

“I would like to see FGCU commit to its strategic plan and vision and move into the next decade from its current adolescent stage to a more mature university that continues its tradition of diversity and service … to develop new programs that are intellectually stimulating and responsive to the needs of our region and the nation,” Isaacs said.

Mendible expressed a similar hope for FGCU moving forward, specifically on how she wants the university to improve.

“I love that FGCU is now a vibrant, lively, more diverse place … I’d like to see us become even more diverse — attracting international students and building our foreign language program,” Mendible said. “I hope that FGCU will continue to honor its founding commitment and recognize the critical importance of the humanities in the development of student citizens.”

In three years, freshman SAT admission scores have risen 55 points while the average GPA has increased from 3.37 to 3.78.

The founding professors have noted the changes in academic caliber as well.

“FGCU is no longer the small, local university that students look at as a default choice but a preferred, desired location,” Rubens said. “I believe with leadership and vision this growth will continue.”