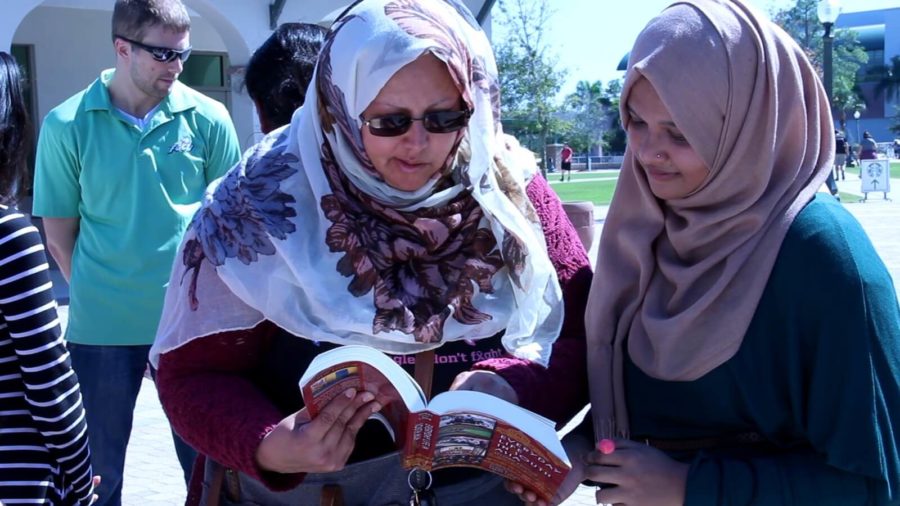 FGCU’s Muslim Student Association hosted its annual hijab day on Feb. 20 in the student plaza following World Hijab Day, which is observed on Feb. 1 each year.

Members of the club, both hijabi and not, helped passersby try on headscarves and quizzed them about some of the misconceptions society has about wearing the hijab.

“In the Quran, it says if you are Muslim, every Muslim woman should cover up when they come in front of men who are not closely related to them, but also in the Quran, it says there is no compulsion in religion,” Zaman said. “So, just because it’s mandatory in Islam does not mean another human being has the right to force another human being to dress modestly or wear the headscarf or to abide by the laws of Islam.”

World Hijab Day, started in 2013 by Bronx native Nazma Khan, was created to abolish some of those assumptions about the hijab not being voluntary. According to its site, WHD was created “as a means to foster religious tolerance and understanding by inviting women (non-Hijabi Muslims/non-Muslims) to experience the hijab for one day.”

Despite the current trend of exposing the peak of one’s hairline, a hijabi does not traditionally show any hair. Zaman said there is no judgment for those who choose not to abide by it strictly, however, as everyone is in a different place in their relationship with God.

Hijabi traditionally cover their hair, do not wear formfitting clothing and cover up to their wrists and down to their ankles. Muslim men as well are instructed to dress modestly — by covering their torso, shoulders and down to their knees.

Many MSA members chose to wear the hijab later in adulthood as Zaman did, and they took the opportunity throughout the day to discuss with those who stopped at the table their experiences before and after becoming a hijabi.

MSA encourages those who have questions about the hijab or the Islam faith to reach out or join them at any upcoming meeting or event. The group can be found on Facebook or Instagram as well as on EagleLink.

Filmed and edited by Rachel Iacovone.