Photo stations appear on campus in honor of 20th anniversary 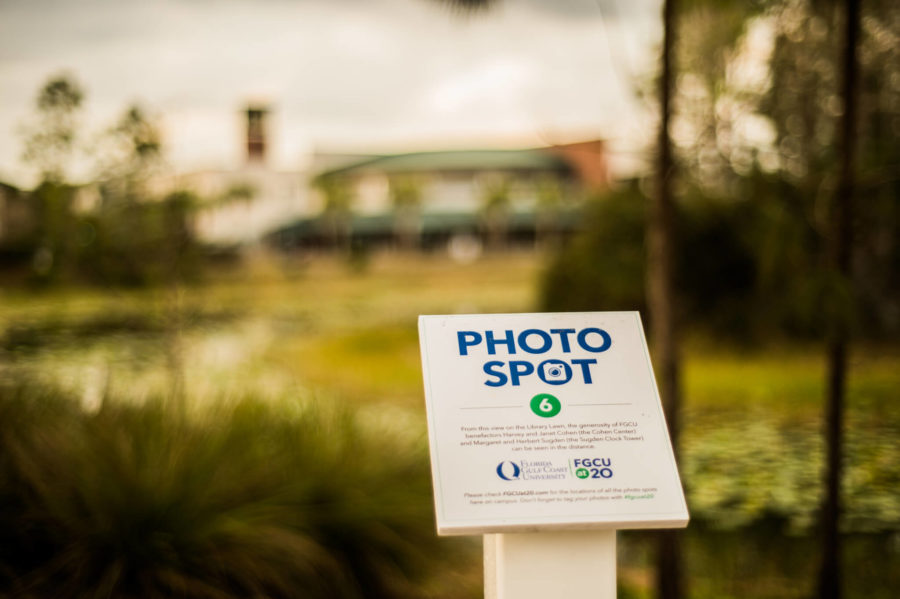 Walking toward Lutgert Hall, students and faculty may notice one of several mysterious photo stations strewn across the university with a plaque that reads “FGCU at 20”.

James Greco, Graphic Artist and Marketing Coordinator at FGCU, is responsible for creating the photo stations strewn across campus.

The eleven photo stations were conceived when Greco noticed locations he naturally gravitated to when photographing for FGCU’s official Instagram page. Lighting and composition were contributing factors to choosing the locations, as well as student involvement.

“It’s a combination of photos I think would make nice backgrounds as well as iconic spots on campus that have developed over the years,” Greco said.

Through Instagram, Greco found popular photo locations for students, including the Eagle in front of Alico Arena where students took pictures after graduation and the fountain in front of Lutgert Hall.

From North Lake Village to the Welcome Center, the photo stations serve to document the progress of FGCU’s history, said Greco.

The celebration for FGCU’s 20th anniversary has been in the works for about two years, as part of the FGCU at 20 planning committee’s initiative to emphasize FGCU’s evolution.

Governor of Florida Lawton Chiles signed a legislation in 1991 approving the new university.

Six years later, in 1997, FGCU opened its doors for the first time and will celebrate its anniversary on August 25th, 2017.

Deborah Wiltrout, Associate Vice President of Marketing and Communications, heads the team that does the marketing for the institution and is the co-chair of the FGCU at 20 Planning Committee.

“When you look at the progress of this institution in 20 years, the growth of campus, the beauty of campus, 15,000 students and 25,000 alumni, the quality of students, faculty and staff; it’s almost unprecedented,” Wiltrout said.  “Celebrating FGCU’s 20th anniversary gives us an opportunity to share our progress with people.”

According to Wiltrout, FGCU at 20 was created as an identity for FGCU’s 20th anniversary.

Since FGCU at 20’s inauguration in August of 2016, the anniversary has been enlarged through events, parades, interactive activities such as the photo stations and historic highlights as featured on the official FGCU at 20 website.

FGCU at 20’s events include parade presence, most recently at the Edison Festival of Light Parade in downtown Fort Myers. FGCU at 20 will also have a float at the St. Patrick’s Day parade in Naples.

According to both Wiltrout and Greco, a photo contest is in the works involving pictures from the photo stations around the university.

“We’re really pushing it out through social media, through contests, through events using these photo stations to tell a bigger story of our campus,” Wiltrout said.