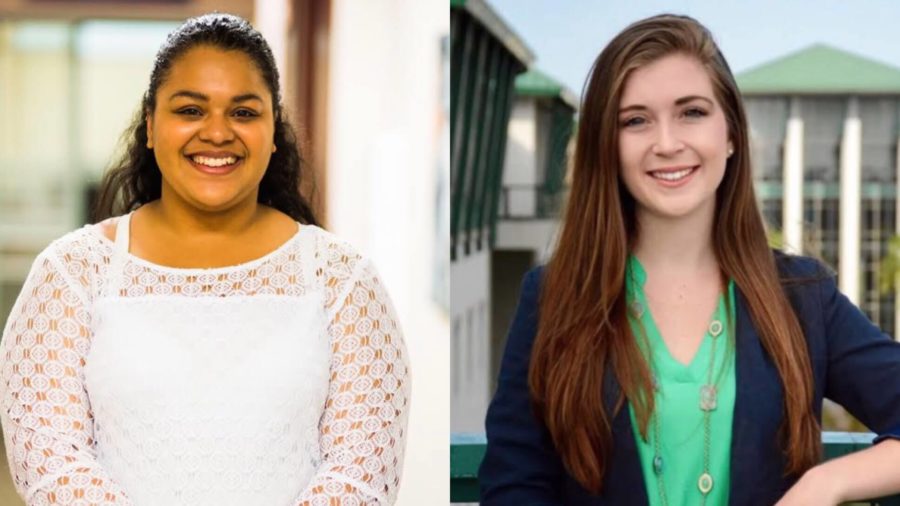 Just after midnight on Tuesday, Feb. 21, members of the FGCU Fusion Party as well as FGCU Eagle Pride met at the Student Plaza, signaling the announcement of the new Student Government parties.

FGCU Fusion Party candidates came in a large group, cheering and hyping one another up, while a select few members of FGCU Eagle Pride gathered at the Student Plaza to hang their promotional banner.

For the 2017-18 school year, the role of Student Body President will either go to current SG Secretary junior Jalisa White with Fusion or current Student Body Vice President senior Emmalyn Green with Pride.

White decided to run because she feels that there is a current lack of prioritizing students within SG.

“I feel like there is so much more we could be doing for the students,” White said.

White is especially passionate about increasing transparency between students and administration.

“It’s directly effecting the students,” White said. “It’s important for us as Student Government to bridge that gap.”

White said that she chose to campaign with these students because she has seen how hard they work and how dedicated they are.

White noticed a passion for serving students in Jacobse “since day one.”

“I think her and I have such unique backgrounds; we each have different strengths,” White said. “Also, with Jamar too, we just make a great team.”

Highlights of FGCU Fusion Party’s platform include holding a 20-day service marathon in honor of FGCU’s 20 years of civic engagement, producing videos updating students on the party’s progress as well as working with administration to create a “sustainable class availability system.”

“If one class is holding you back from graduating, you’re missing out on a salary,” White said.

Green decided to run because her love for FGCU is “indescribable.”

“Being a senior now, I can see how much it’s transformed me,” Green said. “I feel like there’s two key parts of my life that have made me who I am: the first part is my parents, and the second part is FGCU.”

As Student Body President, Green’s goal will be to make sure that the opportunities that she had as a student here are available for others.

“I want to continue to see our university grow,” Green said.

Green said that she chose to run with these individuals because, to her, it’s important to work with people who have a “variety of different aspects.”

“One, people who represent different organizations on our campus, and two, people who know the job and who can get the job done,” Green said.

Green said that she has worked with both of her executive partners in different capacities as well as the senators running with her party.

Highlights from her platform include progressing student resources and services; increasing representation of individual student organizations, departments or colleges; increasing students’ knowledge about what’s going on around campus; increasing diversity among SG; and empowering students with school spirit.

SG’s election week begins on Tuesday, Feb. 28 and comes to a close on Thursday, March 2.

Both parties began campaigning on the Library Lawn on Tuesday, and will continue to do so until elections come to an end on March 2. The FGCU Fusion Party and FGCU Eagle Pride will also utilize social media to campaign.

Election results will be announced on March 2 at 7 p.m. in the Cohen Center Fish Bowl.