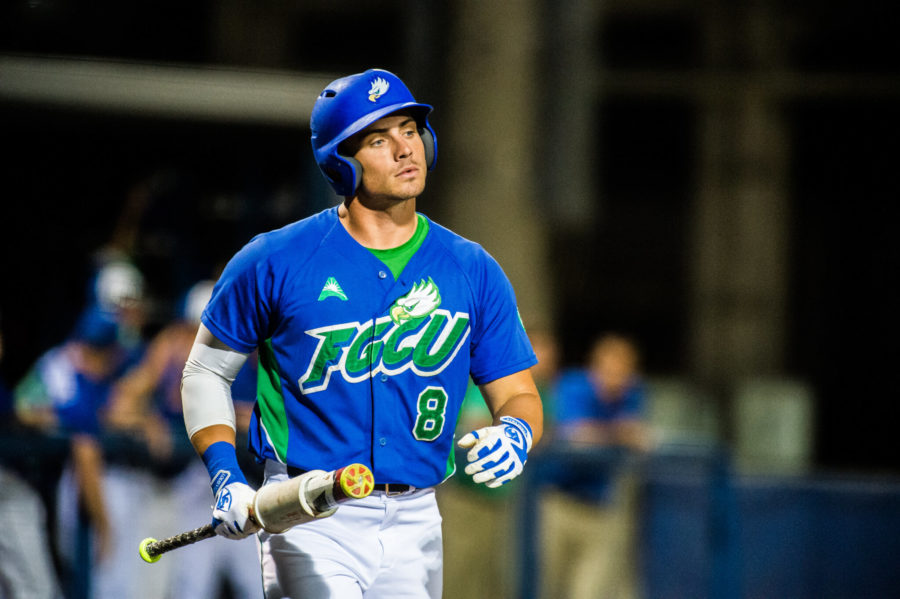 Opening up a three-game series against Bethune-Cookman on Friday, the FGCU baseball team’s four-game win streak came to an end as they fell to Wildcats 13-7.
Kenton Herring made the start for the Eagles, and it did not go well, allowing eight runs (five earned), seven hits and three walks in three innings.
“We got to throw strikes,” said FGCU head coach Dave Tollett. “I think we walked five, hit a batter, and three errors, and all those runs scored. If we don’t beat ourselves and don’t give away freebies, I think we’re in this ball game. I think offense played well enough to win the ball game.”
Tyler Norris (2-0) went up against the Eagles for the second straight year as a year ago he picked up the win in a 1-0 Wildcat win.
Tonight he would not factor into the decision, as he couldn’t get through five innings as reliever Isaak Gutierrez picked up the win finishing the game for the Wildcats.
Bethune-Cookman got off to a quick start as they scored two in the second and six runs in the third to jump out to an early 8-0 lead.
In the bottom of the third, Spencer Levine continued where he left off Wednesday night against Eastern Michigan, as Levine took Norris deep for his first home run of the year to cut the lead to 8-2.
The Wildcats got those two runs right back in the top of the fourth as Bobby Stewart hit a sacrifice fly to center field. Demetrius Sims scored from second as well on the throwing error by center fielder Gage Morey.
The Eagles loaded the bases in the fourth as Levine put a charge into one and just missed a grand slam, but settled for a long sacrifice fly to score Julio Gonzalez.
“That would have put us back in a hurry,” Tollett said. “Spencer’s really swinging the bat. I thought he swung the bat well last week and didn’t have anything to show for.”
The high-scoring game continued as Bethune Cookman scored two more on a couple of hits as Kyle Corbin had his third RBI hit of the game. Two batters later, Jameel Edney knocked in a run on another RBI hit for the wildcats as took a 12-3 lead.
The Eagles took advantage of the Wildcats’ defense, as Mark Coffers scored on a wild pitch and with two men on, Julio Gonzalez single home two.
The Wildcats’ Left fielder Bobby Stewart had the ball go past him in in the outfield, and his throw to third was wild, allowing Gonzalez to come all the way around to score as the Eagles got within five.
That would be as close as they would get as the Wildcats tacked on another run in the eighth to go up 13-7, and they would hold on and give the Eagles their second loss of the season.
Despite the loss, Parker Hamilton pitched four innings of relief and gave up two runs to help save the bullpen.
“I felt pretty good,” Hamilton said. “I felt like in the beginning, the first couple of innings, I had good command of my changeup, lost it a little bit in the last two innings. I had a hard time finding my slider tonight, but I felt like I got pretty good location of my fastball.”
The Eagles will look to even up the series tomorrow afternoon when Kutter Crawford makes his second start of the season for FGCU on Saturday, Feb. 25 at 2 p.m.