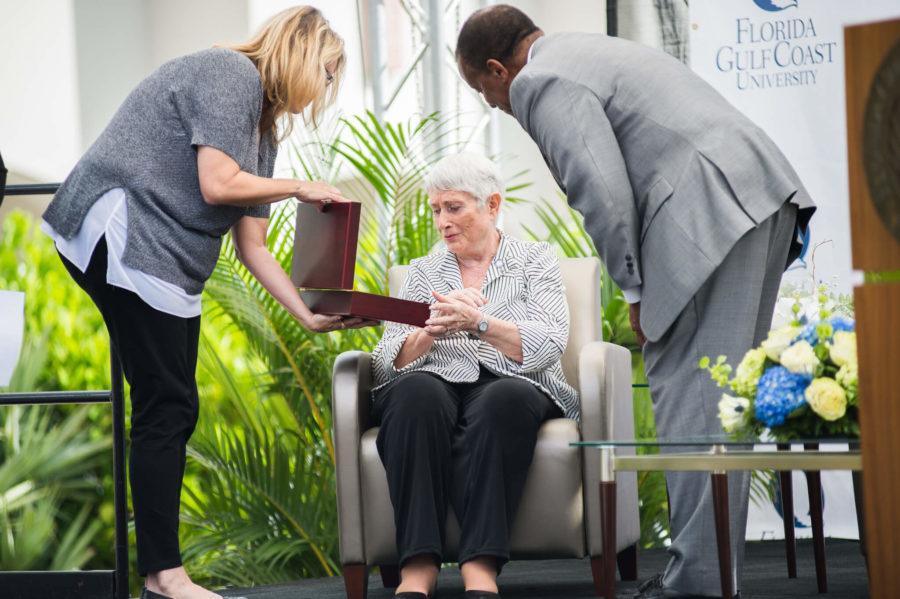 FGCU received the single largest gift in the university’s history on Feb. 24.
Faculty and staff gathered in the courtyard of Marieb Hall Friday morning to witness the unveiling of the $10 million donation to the College of Health and Human Services.
“There’s no question that this is the best day in the college’s history,” CHHS Dean Mitchell Cordova said to the crowd.
The donation was made by former biologist and nurse Elaine Nicpon Marieb, who has also authored 13 textbooks.
Marieb Hall, which was named so in honor of Marieb when she donated $5 million to the college in 2012, will now be home to the Elaine Nicpon Marieb College of Health and Human Services.
FGCU President Wilson Bradshaw, members of the FGCU Board of Trustees and members of the Lee Memorial Health System were also in attendance.
The donation will be given to the college in increments over the next four years in the form of tuition waivers and scholarships. The funds will help create faculty-led clinical health centers both on and off campus, which will provide rehabilitation services and primary care.
Bradshaw said that Marieb has left it up to the college on how to use the donation.
“It will always be used to support students, faculty and programs within the Marieb College,” Bradshaw said.
Bradshaw also said that the money will be used to build on the “excellence that is already there.”
“It’s the gift that will keep on giving for decades to come,” Bradshaw said.
During the ceremony, Marieb was awarded a golden key representing Dr. Elaine Nicpon Marieb Day, which will be celebrated by students, faculty and staff each year on Feb. 24. She was also given a traditional nursing pin by FGCU nursing students as well as a bouquet of apricot roses, the color that represents the profession.
“Elaine (Marieb), your visionary spirit will forever be felt by students who grace the halls of Marieb Hall,” Cordova said to the crowd.
After Cordova spoke, senior health sciences major Jillian Charlemagne took to the podium to express her gratitude toward Marieb. Charlemagne will be the first person in her family to graduate from college and was the recipient of Marieb’s scholarship in August 2016.
“Being awarded Dr. Marieb’s scholarship was, by far, the most surreal and most amazing moment in my entire life,” Charlemagne said. “I have felt a sense of peace and accomplishment that I have never felt before.”
Junior nursing student Casey Haenn was excited to be a part of the ceremony and said that she was glad to see so many people in attendance.
“It’s just so inspiring to see that there’s so many people that believe in our future and are here to support us,” Haenn said.
Len Zaiser, a member of the CHHS Advisory Board, said that the ceremony marked a tremendous day for not only FGCU but Southwest Florida as well.
“We are so proud of the events that happened,” Zaiser said.
Bradshaw, who will retire at the end of June, is glad that the ceremony occurred so that the four final presidential candidates can see how “special” FGCU is.
“Get ready for a very exciting place to work and one where we have unwavering donations over years,” Bradshaw said. “You can’t help but be excited to be a part of FGCU.”
Delete Image
Align Left
Align Center
Align Right
Align Left
Align Center
Delete Heading