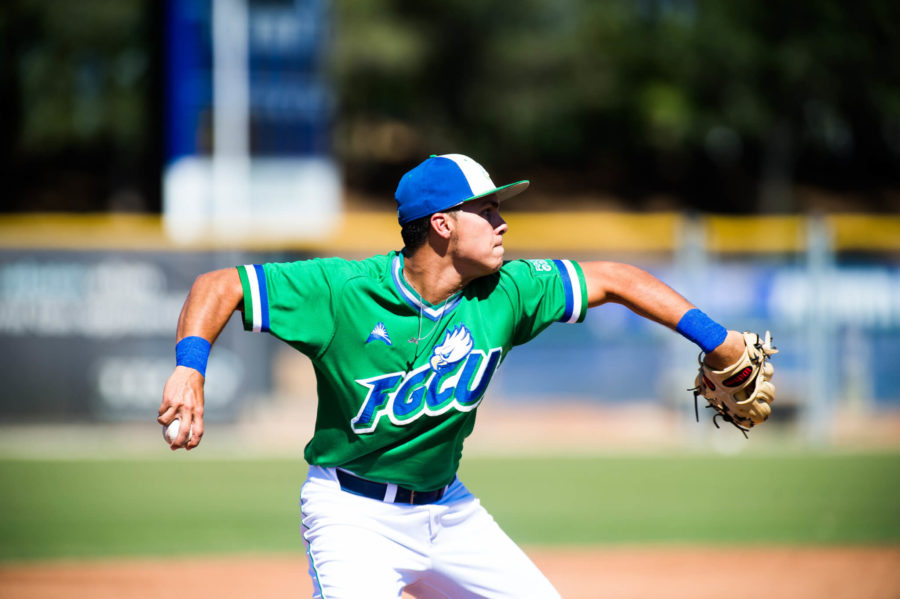 Following their series-opening loss to Bethune-Cookman, the FGCU baseball team bounced back to earn its second series victory of the season with a 7-4 and 8-3 victory over the Wildcats on Saturday and Sunday.
Despite falling behind early in game two of the series, the Eagles were able to use a five-run sixth inning to propel them to a win behind Kutter Crawford’s second start of the season.
First basemen Corey Fehribach had the game-winning hit for the Eagles after colliding at first base die to an errant throw that took him into the base runner earlier in the game. Fehribach lost the ball during the sequence, allowing a run to score.
“Corey’s a tough kid. Corey likes to play. He likes to wear these colors here and he came up after that and got a big hit for us, and boy I’m glad he stayed in the game for us,” head coach Dave Tollett said.
In the final game of the series, the Eagles once again gave the ball to Josh Dye who made his third start of the season.
Dye, who is coming off of Tommy John surgery, only went three innings in his first two starts. On Sunday, he doubled his inning total by going six innings allowing one run on six hits.
Returning to the mound after missing last season, Dye is glad with how he has been used to this point in the season.
“I had to get a feel for everything again,” Dye said. “I haven’t been in a game in a very long time so it was good getting those first three innings in. It got me back to the feel of things.”
Gage Morey had two hits in the game for the Eagles as well as two RBI’s out of the nine spot in the order before coming out of the game for Cameron Krzeminski Eli Lovell also had two hits and reached base three times on Sunday.
The Eagles will now turn their attention to 40th-ranked FAU for a showdown on Tuesday night at Swanson Stadium.
“We got a tough opponent in FAU. We’re just looking to keep the pitching going and have the bats behind them and play some solid D, ” Garcia said.
For photos from game three, head to http://enphotos.smugmug.com/