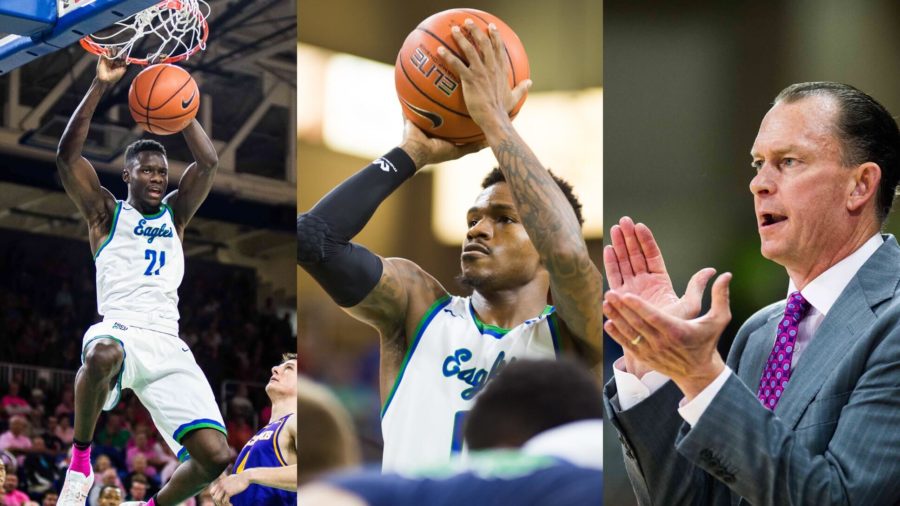 The FGCU men’s basketball team adds to their already successful season with honors for Goodwin, Morant and coach Dooley.
Brandon Goodwin was named the ASUN Newcomer of the Year, Demetris Morant as the ASUN Defensive Player of the Year and Joe Dooley as ASUN Coach of the Year.
Goodwin was also named to the five-player ASUN First Team. The redshirt junior transfer becomes the first player in program history to be named the ASUN Newcomer of the Year.
Goodwin leads the team in points (18 per game) and assists (3.8 per game), ranking fourth and fifth in the ASUN. The transfer already has 541 points, which is on track to break the program’s single-season scoring record set last year by Norelia (597).
Goodwin was also named the ASUN Newcomer of the Week six times this season and recently became the first player in ASUN history to be named both the league’s Player of the Week and its Newcomer of the Week.
Morant lived up to his ASUN Preseason Defensive Player of the Year honor as the 6-9 forward led the league in blocks with 1.5 per game en route to becoming the second FGCU player to be named ASUN Defensive Player of the Year.
The redshirt senior blocked 46 shots this year – six more than anyone else in the ASUN. He had at least one block in all but four games.
Morant was one of just three players in the league to average double-figure points (11.7) and at least nine rebounds (9). The forward is averaging 8.2 rebounds per game, fourth in the ASUN.
Totaling 246 rebounds, Morant secured the third-most rebounds in DI single-season program history. During games against Georgia Southern and Jacksonville, Morant grabbed 17 rebounds.
Coach Dooley becomes the first of FGCU’s three head coaches in the program’s D-I period to be named ASUN Coach of the Year. Dooley guided the team to finish 12-2 in the ASUN for a program-best .857 winning percentage, helping to claim its first outright regular-season title in program history.
Since taking over the Eagles in 2013-14, Dooley has guided FGCU to 88 wins and postseason appearances in all four seasons. This year, FGCU is averaging 79.4 points per game, two points better than last year’s record of 77.2.
Dooley has the Eagles connecting at a 50.2-percent clip from the floor this year, along with possessing a +5.8 rebound margin.
Defensively, the Eagles have led the ASUN in scoring defense in three of Dooley’s four years at FGCU.