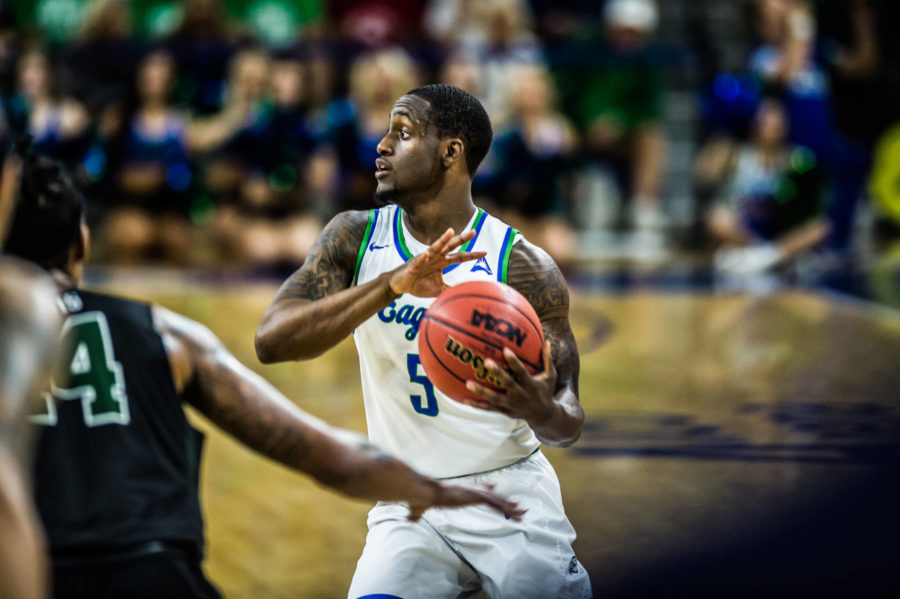 Edging out Stetson 80-70 just four days ago, the top-seeded FGCU men’s basketball punched its ticket to the ASUN Championship Semifinal with an 87-57 victory over the eight-seeded Hatters.
“I thought our guys had a good energy level to begin the game, and the ball moved a lot better than it did the other night,” FGCU head coach Joe Dooley said. “Our defense after the first few minutes was much better. We defended the 3-point line and didn’t give up as many easy baskets.”
Scoring 16 of his 19 points in the second half, Zach Johnson led a quartet of double-figure scorers with hot shooting in the second half to secure the Eagles’ place in the ASUN Championship Semifinal.
“Statistically during the course of the year he’s been a better second-half player,” Dooley said. “He did a really good job of not forcing it in the first half when he didn’t have looks. In the second half, he got on a little bit of a roll and it was good to see him get going.”
In the return of Mr. Double-Double, Marc-Eddy Norelia paced the Eagles’ offense in the first half, scoring 12 points and grabbing eight boards. After coming up short of a double-double in the first half, Norelia secured his second double-double of the season finishing with 12 points and 15 rebounds.
Following his 0-10 performance from long range against the Hatters on Thursday, Christian Terrell was on the mark from behind the arc in the first half, scoring nine points on 3-6 shooting from long range, before ending the night with 12 points.
On the eve of being named ASUN Newcomer of the Year, Brandon Goodwin finished with 13 points before exiting the game in the second half with a bruised hip.
After struggling against Stetson’s zone defense in their previous matchup, the Eagles were able to get going early thanks to Terrell’s strong play from behind the arc and Norelia’s strong play in the paint and on the glass.
Thriving off of the electric 3,744 fans at Alico Arena, the Eagles rode a 12-0 run to close out the first half thanks to three consecutive dunks by Demetris Morant, Norelia and Rayjon Tucker that had the crowd on their feet.
After leading 33-28 with five minutes left to play in the first half, the Eagles’ 12-0 run propelled them to a 48-30 lead at the half.
Coming out of the intermission FGCU’s offense went ice cold, going 4:16 without scoring a bucket during the first eight minutes of the half.
Allowing the Hatters to cut the deficit to 12, 52-40, Johnson countered Stetson’s 7-0 run with back-to-back threes to push the Eagles lead back up to 16.
Johnson’s second-half dominance continued as he propelled the Eagles offense to a 25-point lead before the reserves came hit the hardwood to close out FGCU’s Quarterfinal victory.
Complementing the Eagles’ 50 percent shooting from the field and 42 percent shooting from behind the arc, the Eagles outrebounded the Hatters 51-24, with their 51 rebounds marking FGCU’s highest rebound total in an ASUN tournament contest.
“Coach put emphasis on boxing out and rebounding the ball, and I think we did that very well today.” Demetris Morant said.
Due in part to the Eagles’ play on the glass, FGCU scored 16 second-chance points thanks to 16 offensive rebounds
With their 87-57 victory over Stetson marking the Eagles second most points in an ASUN tournament game and the second largest margin of victory, the Eagles will take on fifth-seeded Kennesaw State in the ASUN Men’s Basketball Championship Semifinal on Thursday, March 7 at 7 p.m. at Alico Arena.
“It’s just a regular game for us,” Terrell said. “We feel really good after this game. Our defense was great. Our rebounding was great, and we made shots. We’re excited to play and excited to get a win and go to the ASUN Championship.”