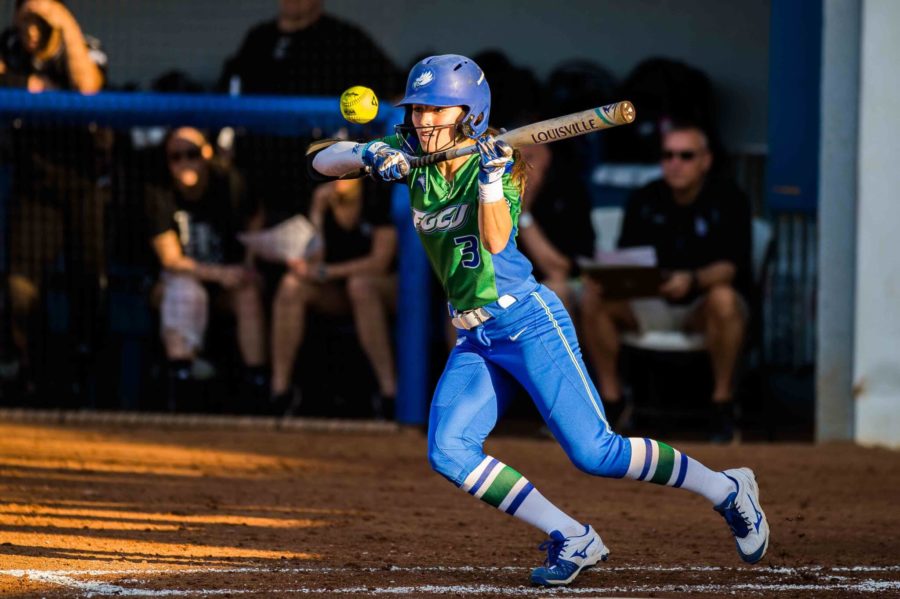 The FGCU/Four Points by Sheraton Invitational got off to a strong start for the Eagles as they won three-straight games the first two days of the event.
The Eagles came out victorious over Boston College 3-1 and earned a 10-2 win over Hofstra to close out the first day. FGCU started off strong Saturday morning against Rutgers, earning a 6-5 win but suffered their first loss later that day against Wisconsin, 0-6.
To wrap up their tournament, FGCU suffered a tough 1-6 loss over FIU Sunday afternoon.
Boston College scored first, but Randolph limited the visitors, allowing FGCU to begin their comeback coming into the third.
Unable to bring in runners, the Eagles caught a break in the seventh when Emily Demurais ran off of Fournet’s reach, sending Brittany McGuire to score.
Fournet drilled a 3-1 pitch to right, giving FGCU a 3-1 win.
Randolph ended the day with seven strikeouts over nine innings while allowing just two hits. Fournet and Huff each collected two hits, with McGuire and Fournet driving in runs.
Concluding day one, FGCU faced Hofstra and earned a strong 10-2 win over the Pride.
FGCU immediately took advantage of two Hofstra errors in the first inning, propelling their dominant performance.
With the Eagles leading 3-0, Verderese plated both Innamorato and Newmark to finish off a five-run inning.
Taylor Wade continued to shut down the Pride, allowing the Eagles to come out on top 10-2.
McGuire and Natalie Lopez led FGCU with three hits while Huff and Fournet each added two.
FGCU earned a close 6-5 win over Rutgers in two days, but suffered a 0-6 sweep against Wisconsin.
The Eagles took an early lead after Fournet’s RBI to score in Kelsey Huff. Yet, the lead was short-lived as the Knights responded in the third.
As the game reached the final two innings, play was back and forth between the Eagles and the Knights.
However, Sutherland walked to tie the game at 5-5 while Huff delivered a walk-off single to come back and win 6-5.
White threw 0.2 innings with a strikeout, while Draney allowed only one run on six hits in the first four innings. Wade pitched 2.1 innings, allowing four runs on seven hits.
Huff, Lopez, and Fournet all had multi-hit games and Huff ended the game with two RBIs.
In the second game of day two, Wisconsin took an early lead with a home run off Riley Randolph and dominated from there on.
FGCU was unable to bring in runners given the opportunities, as the Badgers continued to tack on to their score.
A single and a two-run homer increased the deficit to 6-0 heading into the bottom of the sixth where FGCU put pressure on the Badgers but was unable to comeback.
Randolph went four innings, allowing three runs on five hits. White pitched the final three innings, allowing three runs on four hits, as both pitchers recorded two strikeouts.
Tournament play ended on a low-note for the Eagles as they suffered a tough 1-6 loss against FIU Sunday afternoon.
An early 4-0 deficit and three errors was too much to overcome for the team as they fell to their in-state rivals.
FGCU had a chance to get back into the game early when Fournet drew a two-out walk in the first but was unable to capitalize.
Error after error for the Eagles made the team trail 6-0, until Fournet scored in the sixth, but with two outs, FGCU fell 6-1 to the Panthers.