New FGCU president chosen by Board of Trustees 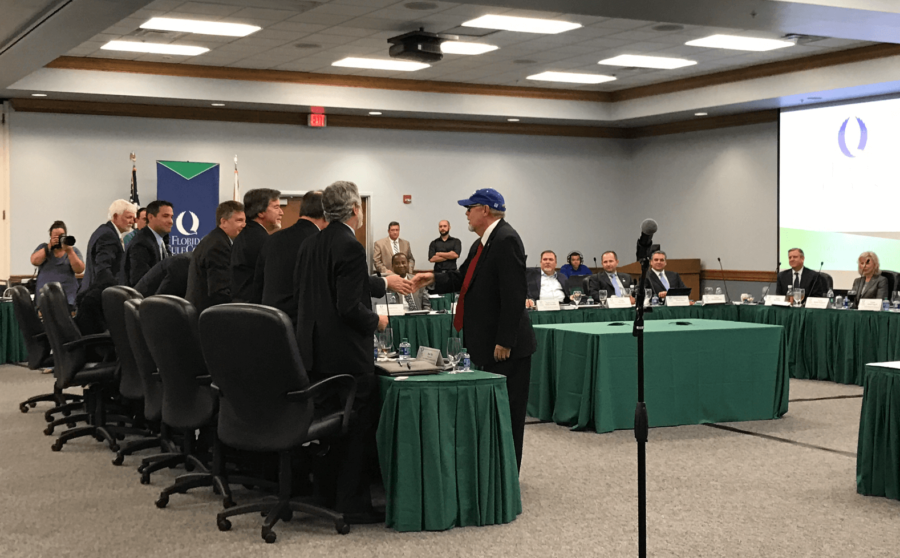 Over a year after the announcement of FGCU President Wilson Bradshaw’s retirement, the Board of Trustees chose his replacement on Tuesday, Feb. 28 after a lengthy search process.
Mike Martin, who is currently the chancellor at the Colorado State University System, will serve as the university’s fourth president starting on July 1.
“Thank you very much,” Martin said after formally accepting the position. “It’s a great honor.”
During the meeting, BOT members interviewed Mike, along with candidates Sue Martin, Mark McLellan and Mark Rudin for a final time, asking what the candidates would bring to FGCU and why they should be chosen for the position with a focus on performance funding metrics, accountability, university inclusion and collaboration and external relations within the community.
“I know a thing or two because I’ve seen a thing or two,” Martin said.
Martin then went on to explain that he has over four decades’ worth of experience in public higher education.
“I’ve been pretty much everything you can be at a public university,” Martin said. “Through that process, I’ve been through about as many challenges and as many opportunities as you can have.”
In his introduction, Martin said that he brings a “deep background” and an “unambiguous commitment to transformational power in higher education.”
Martin said that he was a first generation college student from a “blue collar” family in Northern Minnesota that was “transformed” by a public higher education.
Martin said that his experiences dealing with challenges in budgets, performance funding, fundraising, politics and external relations shaped him to become the leader that he is today.
“Each of those have taught me a bit more about how to navigate during those challenging times,” Martin said.
Martin described FGCU as being in a “unique sweet spot.”
While debating on who to move forward to the Board of Governors, trustees almost immediately ruled out candidate Sue Martin, who is the current president emeritus at Eastern Michigan University.
Trustee Christian Spilker was the first to speak prior to candidate interviews.
“I thought when he sat across from us, the energy was impalpable,” Spilker said.
Spilker said that while Sue Martin and McLellan did well in their interviews, he believes that Mike Martin seemed like the candidate who would do the best in social situations in the FGCU community.
Spilker then made a motion to choose Martin for the position, which was seconded by trustee Joseph Fogg.
The trustees then began debating on whether or not they wanted to move Martin or McLellan forward.
“It’s not an easy choice,” Fogg said. “I agree these are all qualified candidates.”
After deliberation, trustees invited Martin back to the meeting to shake hands with trustees and discuss contract negotiations.
Bradshaw welcomed Martin to the university by giving him an FGCU pin as well as a hat.
“It’s an exciting time in higher ed.,” Martin said. “I think we’re all in an exciting position.”
Martin will be brought forward to the BOG on March 29 and 30 during the BOG meeting at Florida A&M University in Tallahassee.