Eagle Pride and Fusion face off in SG debate 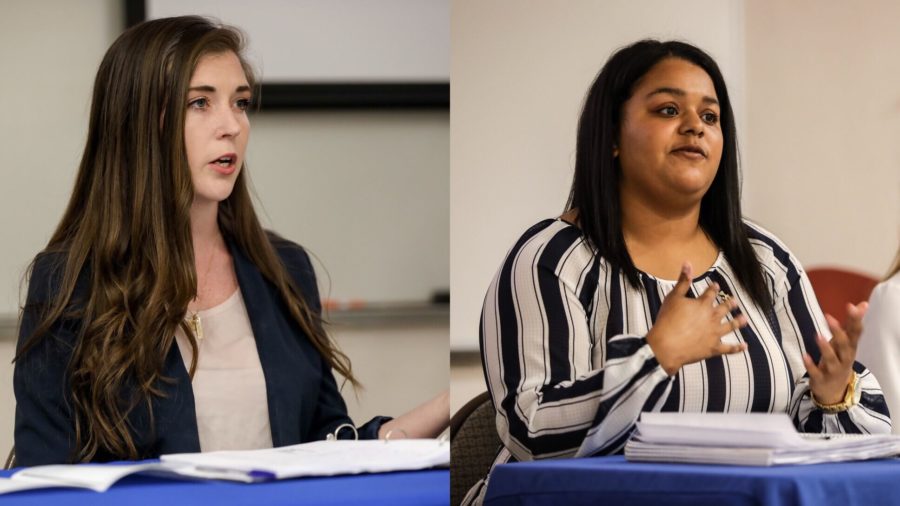 CORRECTION: An earlier version of this article attributed FGCU Eagle Pride presidential candidate Emmalyn Green’s golf cart system idea to FGCU Fusion Party’s Jalisa White when Green said in the debate (beginning at the 42-minute marker of FGCU Student Government’s Facebook video), “One of the things that we addressed in our platform is actually convenience — not a parking issue but a parking convenience. How can we make parking more convenient for our students? And, so, there are ways … there are environmentally friendly golf carts that we can use to get students from the music building over to Lutgert.”

Student body presidential candidates Jalisa White from the FGCU Fusion Party and Emmalyn Green from FGCU Eagle Pride sat alongside their picks for vice president, Madeline Quinn from Eagle Pride and Antonia Jacobse respectively, and took questions from the audience as well as individual party questions.

Before diving into those questions, current SG Treasurer Ivan Rodriguez took to the podium to introduce the parties and welcome audience members.

After cracking a few jokes, Rodriguez welcomed SG advisor and Director of the Office of Student Involvement Julie Gleason to the podium.

“That’s a huge honor and also a huge responsibility,” Gleason said about serving in SG.

After SG Supervisor of Elections David Worley addressed the crowd, debate moderator Lauren Sigmund took to the front of the room, asking the two parties to introduce themselves and their platform to the audience during three minutes of introductions.

Fusion began first, with White explaining what she finds important in a leader.

“I think that it is so important to give back to the students,” White said.

Eagle Pride then introduced themselves to the crowd, with Green solidifying the aspects of her party platform.

“I really believe in our party and what we stand for,” Green said.

Individual party questions were asked to the parties shortly after introductions.

When asked about diversity on campus and how she would help increase that at FGCU, White said that she plans on creating a student diversity group on campus.

When asked the same thing, Green said that she would implement a petition page on SG’s website so that every student’s voice is heard. She also said that she and her party plan on hosting a “Flags on the Lawn” event to celebrate diversity on campus if elected.

“I truly believe in our party and the representation that it holds,” Green said.

When asked about parking on campus, both Eagle Pride and Fusion said that they believe that there isn’t a parking problem on campus, rather a convenience problem.

Green suggested implementing a poncho program during rainy season when students walk to class in the rain as well as a golf cart system that would take students back and forth from garages to main campus.

After the closing of individual party questions, a five minute intermission began. During that intermission, attendees were encouraged to write down questions that would be asked to the parties during the audience questions portion of the debate.

The first audience question was directed at Fusion in regards to sustainability on campus and how they would help continue to practice and promote sustainable actions.

White plans on focusing on sustainability if elected.

“Something I do plan to do if elected is to meet with the director of sustainability, meeting with her and talking to her about ways to be innovative when it comes to sustainability because that’s something that we pride ourselves on as a university,” White said.

The second question was directed toward Eagle Pride in regards to school spirit and how that party would increase it.

“Obviously we want to promote and keep students engaged in our tailgates and different events we offer through athletics,” Quinn said.

Quinn then went on to explain Eagle Pride’s plan on incorporating school pride in architecture on campus and said that current sculptures around campus “don’t necessarily represent our school spirit.”

“We would like to see more of that incorporated into our main campus so students coming through, even current students, we’d love to see them continue their spirit,” Quinn said. “We want to see that Eagle pride represented throughout campus.”

Green said that Eagle Pride also plans on reaching out to students from various colleges and organizations that SG hasn’t reached out to before.

The third question was directed toward Fusion in regards to a transparent government and what that means to their party.

“Being transparent doesn’t mean going to a Board of Trustees meeting,” White said. “It’s going out to the students and even if it’s just simple as tabling or creating a survey.”

White wants to “put the student back in Student Government” and wants to create open forums if elected.

Jacobse said that Fusion also wants students to hold their party accountable if elected to ensure that “SG is doing what we’re promising to do.”

The last question was directed toward Eagle Pride in regards to FGCU’s growing population and the party’s stance on whether or not the university should become more selective or build more facilities.

Quinn said that growing FGCU’s facilities isn’t a possibility in the near future.

“They’re working on what they can but in the upcoming years there’s not a whole lot that can be done as far as building more housing without tearing down those trees,” Quinn said.

After the audience questions, both parties said closing remarks to the crowd.

Students interested in voting in the SG 2017 Election can do so online via EagleLink or on campus in Cohen Center 247 until the polls close on Thursday, March 2 at 5 p.m.