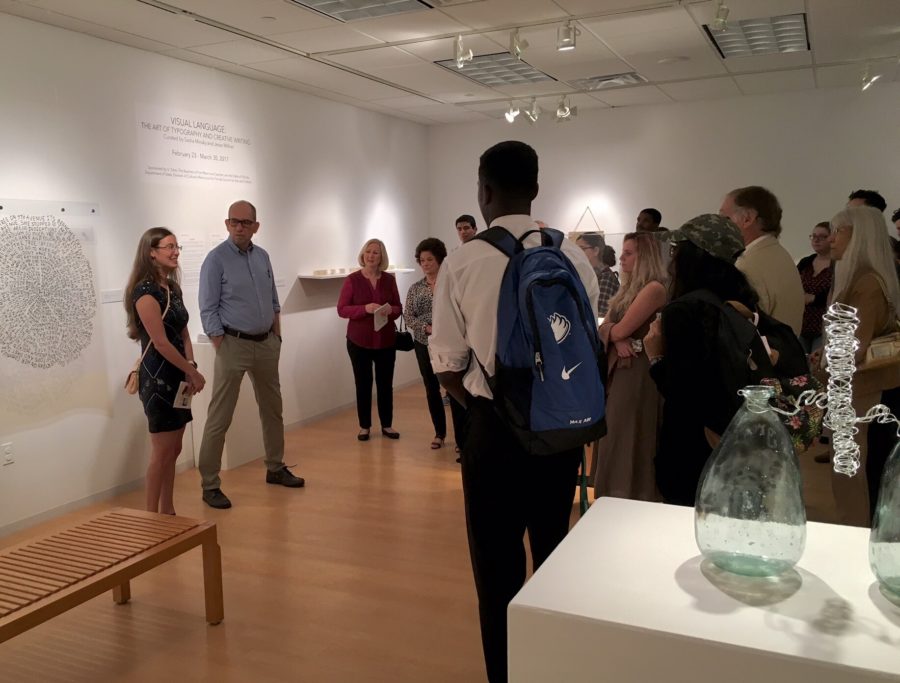 Typography, which is described by professor Sasha Minsky as “the design and creation of type,” is a field of design that is often misunderstood.

FGCU’s latest ArtLab exhibit is hoping to change that.

Minsky chose four short stories from Millner’s students and then allowed her students to choose which story they would like to work with for an installation typography piece.

“The goal was to get people to look at typography in a whole new way,” Minsky said.

She encouraged the students to focus on the “environment and experience” when creating their work.

The 12 students had eight weeks to complete the project. They used a variety of materials for their work, including glass, wood, resin, vinyl, watercolor, Plexiglas and wire.

Some of the work hangs from the ceiling; one piece covers a window; and one student even built a desk by hand and stenciled words on to it.

Marile Franco, one of the student artists, described her experience as finding “beauty in the pain,” and said that her work required a lot of close attention to detail.

“The meaningful interpretations of the written works and craftsmanship was impressive, and the students should be very proud of their accomplishments,” Minsky said.

Until the gallery opening, Millner and his four writing students had not seen any of the artwork.

“It’s amazing,” said Taylor Sweat, one of the student writers. “It’s really inspiring that they took these works of art that are just on paper and turned them into actual art hanging on the walls. It’s just really cool to see.”

For Millner, it was all about the students.

“The only thing that I did was have the students write, and what came out of that is just amazing,” Millner said. “I appreciate how this is really bringing the language to life.”

Minsky had the same sentiment.

“I am incredibly proud of their dedication, innovation and working together to develop truly impactful pieces of installation typography,” Minsky said. “It was an honor to be part of the process and supporting the students as they developed unique creative solutions to showcase typography as an art form and bring their work to life.”

Minsky often brings up the idea of a creative community, whether it be in an interview, the opening statement for the exhibit or one of her classes.

In preparing this exhibit, she had one main goal in mind.

“My hope is for these emerging typographers and all design students to continue to build a creative community, support and inspire one another to push their imagination and skills to the next level,” Minsky said.

The exhibit is open until March 30 in the FGCU ArtLab Gallery, located on the first floor of the Library.