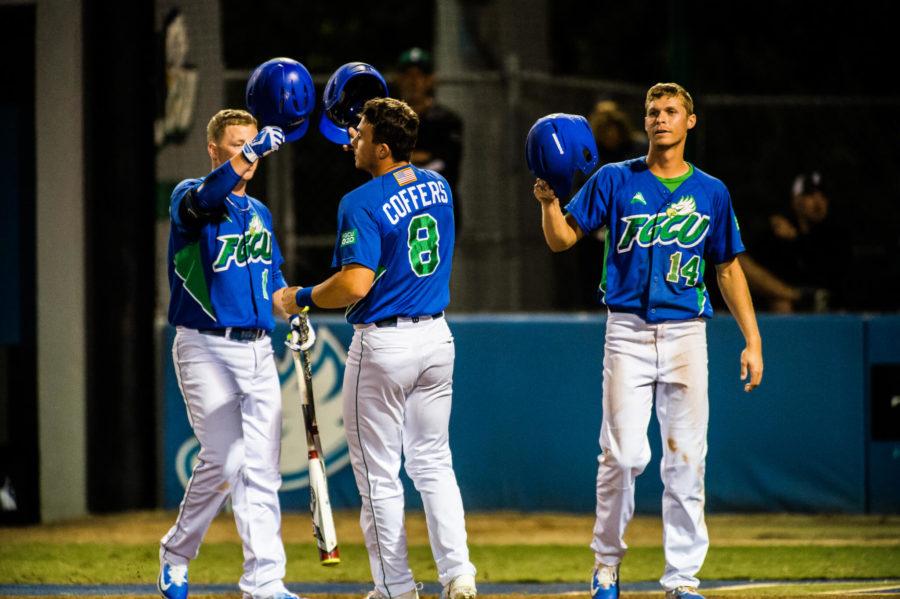 Fresh off of its 2-1 series victory over Bethune-Cookman, the FGCU baseball team sparked an eight inning rally to come away with a 7-5 win over FAU on Tuesday night.
Spencer Levine’s two-run double proved to be the difference as the Eagles rallied with two in the seventh and two in the eighth to pick up their seventh win of the season.
FGCU head coach Dave Tollett said, “That’s a big instate win for this program right now. We’re excited. FAU is always good, and were excited to get on the plane on Thursday and go play UNC Wilmington.”
Mario Leon (0-1) made his second start of the season for the Eagles, as he was opposed by lefthander Sean Labsan (0-0) for the Owls.
Leon went four innings while giving up four runs on seven hits, but the Eagles’ bullpen combined to pitch the last five innings, only giving up one run on three hits.
Nick Rivera got the Eagles going as he walked with two outs in the first followed by a Eli Lovell double to put runners on second and third for Levine.
Levine would strike out, but would reach first base after the catcher Pedro Pages attempted to tag Levine on the dropped third strike but the ball got away and Rivera would score the Eagles’ first run of the game.
Richie Garcia plated the second run on an RBI hit, giving FGCU a 2-0 lead.
The Owls would get a run right back after getting to men on base before right fielder David Miranda hit a sacrifice fly to center, trimming the Eagle lead to 2-1.
Steven Kerr tied the game at two for FAU, on a 2 out single. Following Kerr’s game tying RBI, the Owls gained a 3-2 lead.
FGCU grabbed the lead once again with a two out rally in the home half of the third as Eli Lovell walked and Levine knocked him in with an RBI double.
FAU would respond once again when David Miranda came through with an RBI hit tying the game at 3.
A wild pitch later that inning would give the Owls their first lead of the game. FAU added another on an RBI single by Pages, scoring the fifth Owl run of the game.
FGCU got two men on in the seventh before Jake Smith knocked in his first run of the season cutting the lead to 5-4.
They would knot the game up at five, as Jake Smith stole second and the throw would get away, scoring Gonzalez to tie the game.
The Eagles would take the lead in the eighth, getting two men on base and with two outs. Levine would double home two and score both Coffers and Lovell to give the Eagles a two-run lead.
“I was just trying to get something over the plate that I could hit hard.,” Levine said. “With two outs, I was looking for a good pitch to put a good swing on it and he gave it to me. He gave me a curveball over the plate.”
Sterling Koerner came in and registered his second save of the season retiring batters in a 1-2-3 inning to close out the Eagles victory.
“One thing we know about Ster(Sterling Koerner); he is going to be around the zone,” Tollett said. “He is going to throw strikes and he has a couple of out pitches. His velocity was up today, so I like that.”
FGCU will get set to head on the road for a weekend series at UNC Wilmington as the Eagles look to continue their strong 7-2 start to the season.
“There no question that the month of March is very tough, but the great thing is being 7-2 and I don’t think we played well yet,” Tollett said. “We’re excited about that as a coaching staff because there is room for improvement.”