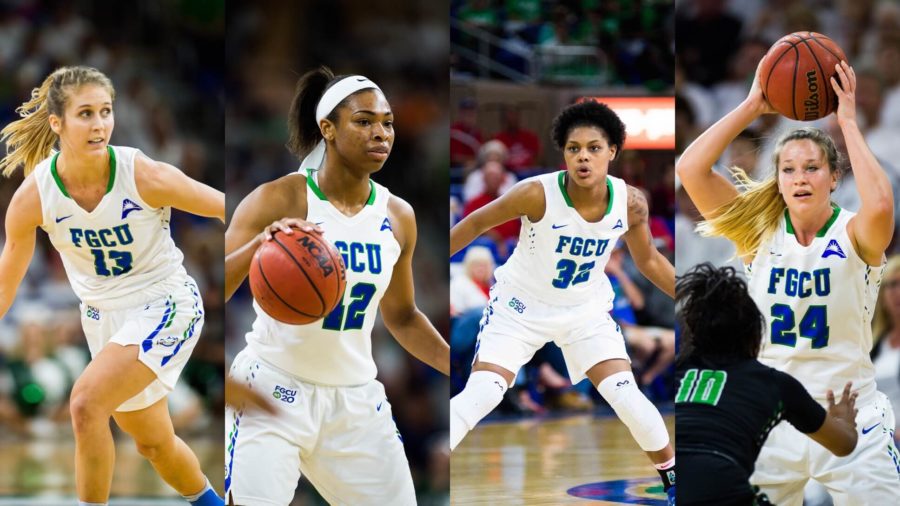 On the eve of its ASUN Women’s Basketball Championship Quarterfinal matchup against UNF, the FGCU women’s basketball team had four members collect ASUN Postseason awards.
Announced by ASUN on Thursday, March 2, Rosemarie Julien took home ASUN Newcomer of the Year and claimed a spot on the ASUN All-Conference First Team. Jordin Alexander earned a spot on the ASUN All-Conference Second Team.
Rounding out FGCU’s award recipients, Tytiona Adderly was named to the ASUN All-Freshmen team, while Taylor Gradinjan received a spot on the ASUN All-Academic team thanks to her 4.0 GPA.
Becoming the program’s first ever ASUN Newcomer of the year, Julien lead the Eagles’ on offense averaging 11.2 points per game and 13.1 points per game in conference play. A transfer from NJCAA Division 1 side Chipola College, Julien is FGCU’s eighth consecutive member to earn a spot on the ASUN First Team.
“Rose had an outstanding first year with us,” FGCU head coach Karl Smesko said in a FGCU athletics press release. “She competes on both ends of the floor. It is great seeing her receive such high recognition from ASUN coaches.”
Joining the Eagles as a graduate transfer from Brown University, Alexander averaged 11 points per game in conference play to land a spot on the ASUN All-Conference Second Team. A nightmare to opposing team’s best player due to her strong play on the defensive end, the Fishers, Indiana native leads the team in steals with 48. With 33 steals in ASUN play alone, Alexander is one steal shy of league-leader Tatiana Torres.
“Jordin (Alexander) had an outstanding conference season,” Smesko said. “She is good in so many areas. I think she has really impressed everyone the last two months with the level of her play.”
Racking up a team-high four double-doubles in her rookie campaign, Adderley’s ASUN conference leading 123 boards landed her a spot on the All-Freshmen team. Averaging 7.4 rebounds per game throughout the campaign, the Jupiter native averaged 9.5 rebounds per game in conference play.
“Ty (Tytiona Adderly) has had an exceptional freshman season,” Smesko said. “She is a really smart player and a relentless rebounder. She has a chance to grow into being one of the best players in the ASUN.”
Recognized for her work off the court, Gradinjan’s 4.0 GPA landed her a spot on the All-Academic team for the second consecutive campaign.
Leading FGCU from behind the arc with 63 triples, Gradinjan is one of two players on the eight-person academic team with a 4.0 GPA.
“Taylor (Gradinjan) is someone who gets the job done in the classroom and on the court,” Smesko said. “It is nice to see her earn this recognition.”