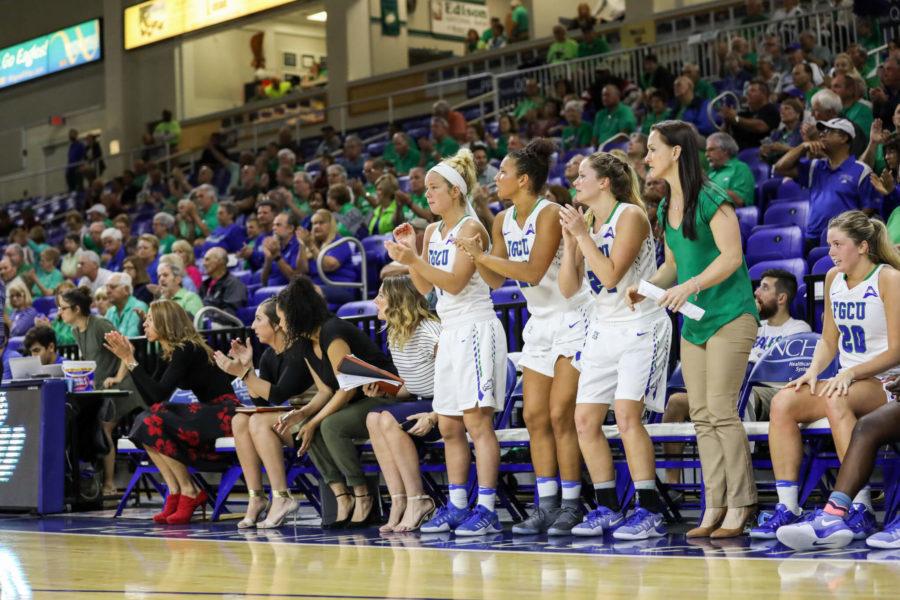 Coming off of their overtime loss to Stetson in the regular-season finale, the No.2 FGCU women’s basketball team shook off a poor first half to defeat No.5 UNF 59-42.
“Obviously this was a game where we had to rely on our defense because offensively, we had a really bad first half,” FGCU head coach Karl Smesko said. “We didn’t shoot it well. We didn’t work together well to create opportunities, so we understand that we’re going to have to play better offensively if we’re going to get past this next round. But the second half was much better. People started knocking down shots. Jordin (Alexander) got us going, Taylor Gradinjan started knocking down threes, and Ty (Adderly) got us extra possessions and a couple baskets, so it was a good second half.”
Playing in front of their home fans at Alico Arena for their second consecutive game, the Eagles will take on No.3 Jacksonville in the ASUN Women’s Basketball Championship Semifinal on Wednesday, March 8 at 7 p.m.
Going 5-28 from the field in the first half, Jordin Alexander scored 10 of her 14 points in the second half to fuel the Eagles’ much-improved second half on offense.
“In the first half, I don’t really think we were playing our game,” Alexander said. “A lot of players were hesitant to play our game since we weren’t getting into any type of flow. In the second half, we started looking to pushing it a little bit more and that’s where we’re strong. We got into a flow and people relaxed once we started hitting our shots and got their confidence back.”
Joining Alexander in double-figures, Erica Nelson and Rosemarie Julien finished with 11 points apiece, contributing to FGCU’s 51.9 percent shooting performance from the clip in the second half.
Jumping out to a 9-2 lead in the first four minutes of the first quarter, the Eagles went ice cold from the field for the remainder of the first shooting 3-15 from the field.
Luckily for FGCU, UNF had struggles of its own on offense, as the Ospreys went 2-8 from the field. Thanks to a 7-0 run before the end of the quarter, the Ospreys tied the game at nine heading into the second.
The second quarter proved to be much of the same for both sides, as the Eagles’ scoring drought carried into much of the second quarter.
With their only points coming from the charity stripe, Erica Nelson ended FGCU’s 13 minutes without a basket with a much-needed three but Simone Brown answered back with a three of her own to put UNF up 17-16.
Despite going the final 4:02 of the second quarter without a basket, the Ospreys made two perfect trips to the charity stripe to hold a 21-18 advantage at the half.
Holding UNF without a bucket for the majority of the third quarter, the Eagles’ offense came alive in the third.
Following a jumper from Alexander and a three from Taylor Gradinjan to tie the game at 23, FGCU sparked a 12-0 run to open up a seven point, 30-23, lead with 3:31 left to go in the third.
Allowing UNF to make just three baskets in the third quarter, Tytiona Adderly capped off the Eagles’ strong third quarter with a layup of the glass at the buzzer to give FGCU a 35-27 lead heading into fourth quarter.
Building on their strong offensive performance in the third, the Eagles jumped out to a 10-point lead in the early moments of the fourth thanks to back-to-back buckets in the paint by Adderly and Julien.
While both teams played better offensively in the final quarter, FGCU’s consistent play on defense proved to be the main factor in the final minutes of the game, as the Eagles turned defense into offense.
Jumping out to a 52-37 lead following a perfect trip to the line by Alexander, Julien knocked down a triple with less than two minutes left of play to put the final nail in the coffin.
Facing the Dolphins for the first time in the ASUN tournament since its Championship Final defeat last season, FGCU will look to advance to the ASUN Women’s Basketball Championship Final and take on the winner of No.1 Stetson and No.4 Kennesaw State.
“JU, one they’re a really good team and two they’re really talented,” Smesko said. “You can’t beat JU unless you play an excellent game, so we know we have a tall task in front of us, and we’ve got a couple days to get ready for it.”