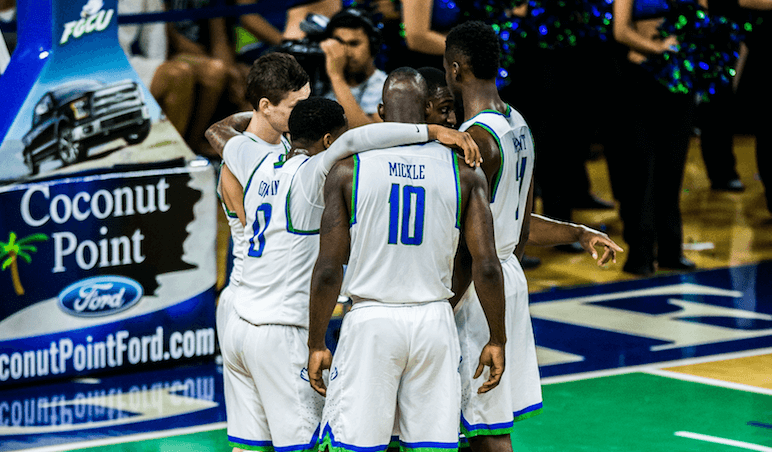 With a spot in the NCAA tournament on the line, the No.1 FGCU men’s basketball team will take on No.3 UNF in the ASUN Men’s Basketball Championship Final on Sunday, March 5 at 3 p.m. at Alico Arena.
With a 74-62 victory over Kennesaw State on Thursday, the Eagles rode a combined 42 points from Brandon Goodwin and Demetris Morant to make it to their fifth ASUN Men’s Basketball Championship Final in six years.
With the biggest upset of the tournament thus far, the Ospreys drained a season-high 16 threes to defeat No.2 Lipscomb 91-85 in Nashville on Thursday. Riding 18 points from ASUN Player of the Year Dallas Moore to victory, UNF will be making its second ASUN Men’s Basketball Championship Final in the three years.
The Eagles took the season series against the Ospreys during the regular season with an 86-82 victory on the road and a 74-59 victory at home.
The two main players to watch in this Championship matchup will be Goodwin and Moore as they look to send their respective teams to the NCAA tournament.
Averaging 18.2 points per game on the campaign, Goodwin averaged 22.5 points per game in FGCU’s two games against UNF.
Averaging 24 points per game this season, Moore averaged 24.5 points per game against FGCU in the Ospreys’ two games against them.
Coming into the final averaging 80.5 points per game, the Eagles will look to build off its high-scoring offense and make its second consecutive trip to the NCAA tournament for the first time in program history.