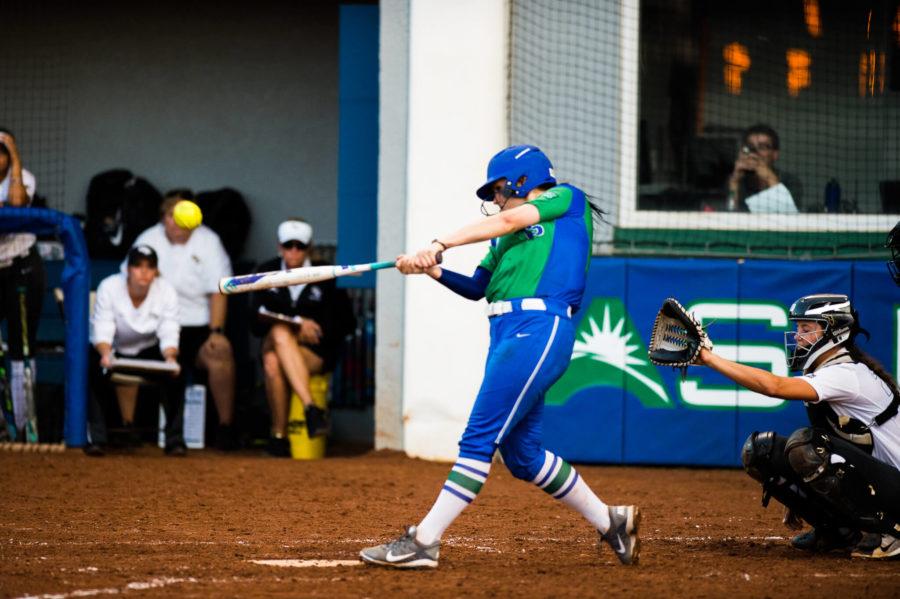 In the UCF Spring Fling Invite opener, the FGCU women’s softball team took a 10-7 victory over Providence Friday night.
A five-run second and three RBIs from both Ashley Swiderski and Racquel Fournet assisted in the win.
This win also broke a three-game losing streak for the Eagles, courtesy of eight runs in the first two innings.
Fournet and Swiderski were key in the first inning, making the score 3-1 after the first. Come the second inning, the Eagles scored five runs, highlighted by a two-run double from Swiderski.
By the fifth inning, the score was 10-3 in favor of FGCU, but Providence was not done fighting back.
In the final two innings, the Friars scored four runs, making the score 10-7 and putting pressure on the FGCU defense. Yet, the Eagles were able to close on the 10-7 win.
FGCU was back in action Saturday, facing both Providence and UCF. The Eagles split the two games, sweeping Providence 3-0 but suffering a 3-5 loss against UCF.
Wade produced one of the best games of her career with a seven-strikeout performance in the first game against Providence.
The senior allowed just two hits through four innings to give the offense time to increase the lead.
This assisted in the early advantage courtesy of an RBI from Fournet that scored in Kelsey Huff.
The Eagles made the score 3-0 after the third, taking advantage of a throwing error scoring both Fournet and Natalie Lopez.
Wade limited the Friars to four hits the rest of the way to secure the win.
Closing off day two, the Eagles took an early lead on a McGuire double to score on Lopez.
Lopez and McGuire led the Eagles combining for five hits, and McGuire tallied two RBIs.
It wasn’t until the fourth inning that UCF grabbed the lead, but Randolph kept the Eagles in the game.
Randolph struck out one final batter to end the fifth as Wade came on to pitch the sixth.
FGCU was unable to score in the seventh, allowing Courtney Rotton of UCF to end the game with a two-run home run, giving the hosting team a 5-3 victory.
The weekend concluded with a 2-5 loss against Providence. The Eagles fell behind 3-0 after the first inning and the Friars put on a pair more in the fourth with FGCU ending the weekend 2-2.
After falling behind 3-0 in the first, the Eagles were unable to stop the Friars’ dominance.
Providence stayed in control, scoring twice more in the fourth to make it 5-1, with FGCU scoring just once more in the fifth, falling 5-2.
Taylor Wade evened up her record at 4-4 when she allowed five runs on eight hits with a career-high nine strikeouts.
Huff led the Eagles with two hits and two runs scored.
Next, FGCU will come home to host Holy Cross and Ball State Tuesday, March 7 starting at 5:45 p.m. Play against Holy Cross will then continue to Wednesday, March 8 beginning at 5:00 p.m.