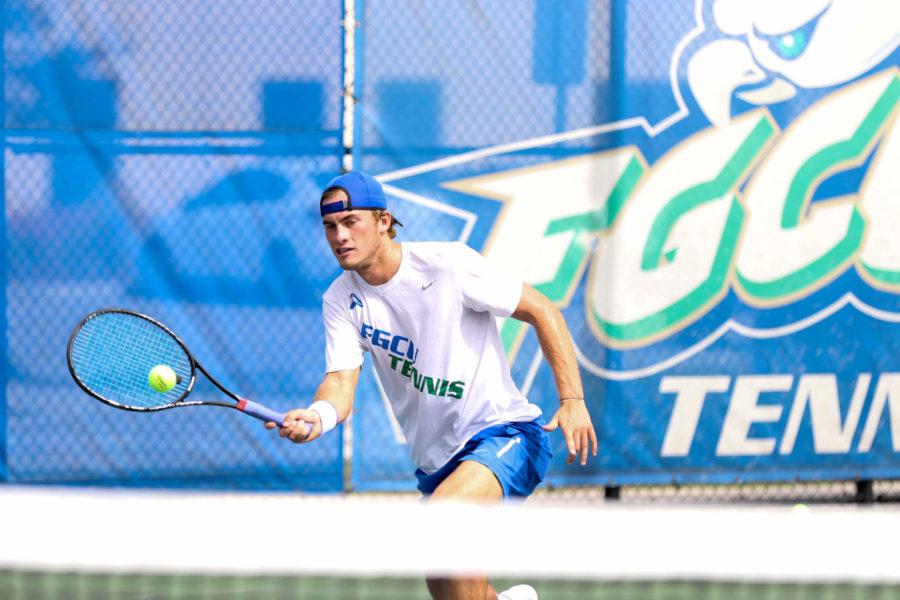 The FGCU men’s tennis team earned a 5-2 victory over Xavier Thursday night. This win also marked the 19th of 22 home matches that ended in favor of the Eagles since 2015.
“Today was a complete team effort, and I’m really happy for all the guys for this hard-fought win,” head coach CJ Weber said. “We put a special focus on doubles today, and that ended up being a huge difference between this match and a couple of the other close losses we have had.”
With FGCU leading 3-2 in the match, Sam Chaffin faced Nate Dell in the first set with a 7-6 (5) win in the tiebreaker. However, in the second set, Chaffin pulled away midway, winning the match with a 6-4 victory.
Oliver Landert played out a tough three-set victory. Falling 3-6 in the opener, Landert came back to secure the second set 6-4. Lander then finished the match with a 6-3 win in his third set.
With wins at No. 1 and No. 3 doubles, the Eagles quickly secured an early 1-0 lead. The No. 1 pairing of Landert and Felipe Ramirez took down Matt Bishop and Gabriel Araujo, 6-1.
The No. 3 duo of Pedro Carle and Ezequiel Cerrini earned a 6-4 victory over Trent Smith and Connor LaFavre.
Ramirez’s 6-4, 6-2 victory in singles play allowed FGCU to take back the lead. While Ruiz’s 6-4, 6-3 win over Jack Dykema nearly clinched the match for the Eagles.
However, Javier Fernandez suffered an unusual loss at No. 4, falling 7-5, 6-4 to Trent Smith, before Chaffin and Landert closed off the night.
Next, the Eagles will host ETSU Friday, March 10 with play beginning at 4 p.m. start.