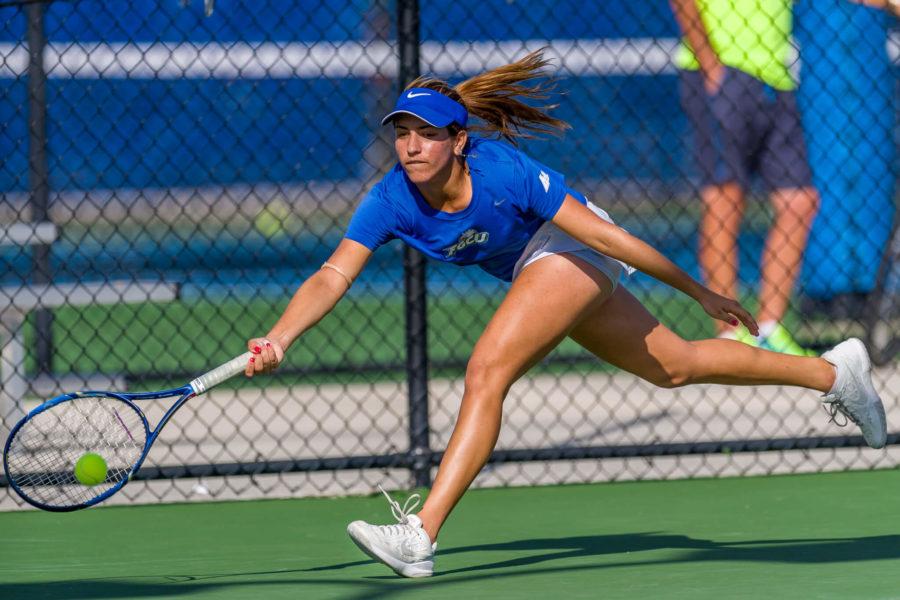 The FGCU women’s tennis team defeated Troy 4-1 Friday afternoon at the FGCU Tennis Complex. This win improved the Eagles’ overall record to 6-3 and 5-0 at home.
The Eagles’ dominance began in doubles play and never stopped, winning three of the first four singles matches in straight sets.
The No. 1 duo of Julia Ascúa and Julianna Curtis won its second straight match and 14 of its last 17 matches with a 6-2 win against the visitors.
The No. 2 paring of Breana Stampfli and Maja Ornberg cruised to a 6-1 win against Alicia Rodriguez and Hannah Seizer.
In singles play, Ascúa and Stampfli defeated each of their opponents in straight sets.
No. 3 Ascúa defeated Karay 6-0 in the first set then closed the match in the second set with a 7-5 win. No. 2 Stampfli took down Seizer 6-4, 6-1.
Unfortunately, at the No. 5 spot, Sara Kelly dropped her match to Efriliya Herlina, but No. 4 Laura Falceto Font took a straight-set win. Falceto defeated Xue 6-2, 6-4.
Freshman Bridget Forster trailed 5-2 in the set but responded to claim the final five games of the set to take it 7-5. Before the match was called, Forster took the second 5-1.
Next, the Eagles will host Georgia Southern Monday, March 13 at 5 p.m. at the FGCU Tennis Complex.