No. 24 FGCU baseball has 10 game win-streak snapped by Ohio State in series finale 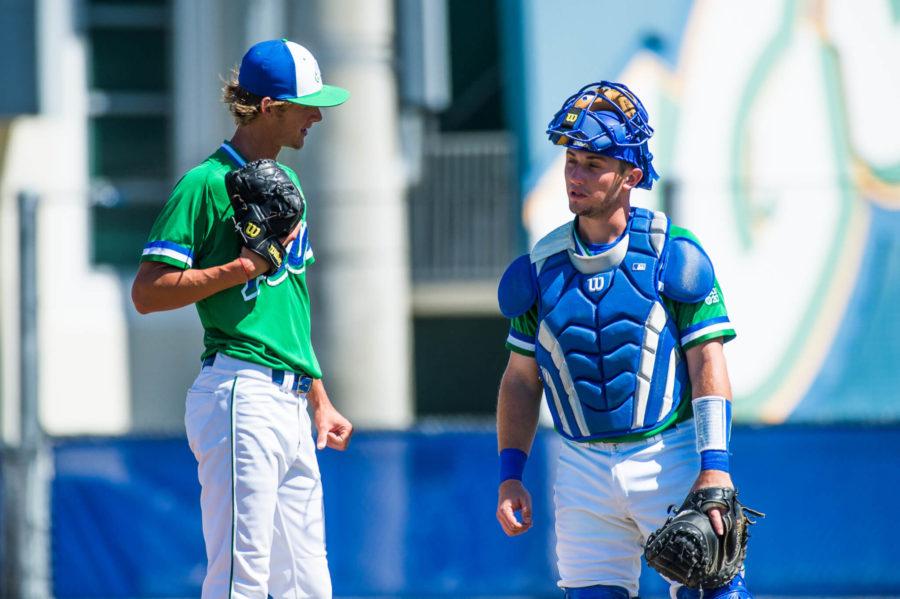 In the final game of its three-game series against Ohio State, the No. 24 FGCU baseball team had its ten-game win-streak snapped, losing to the Buckeyes 5-4.
The Eagles were down 5-1 entering the ninth inning. FGCU led off the ninth with three-straight doubles to trim the lead to 5-3. Pinch hitter Jake Smith would hit a sacrifice fly to get the Eagles within a run, but the Eagles would not be able to score the tying run from second as Julio Gonzalez grounded out to end the game.
“We gave it another run there at the end but came up short this time,” FGCU head coach Dave Tollett said. “Our guys hit the ball hard for much of the game but again struggled to find the holes. I give our guys credit for not quitting until the final out was recorded. Winning four games in a week against the caliber of teams we played is always a plus, and we’ll continue to work hard heading into more tough games ahead.”
Josh Dye got the start for the Eagles and picked up his first loss of the season as the lefty went 6 and one third innings, allowing five runs (four earned) to move to 3-1 on the year.
The Buckeyes jumped out quickly to a 3-0 lead thanks to Jalen Washington who tripled Tre’ Gantt to score the first run.
With two outs, Bo Coolen hit a two-run home run to cap off Ohio State’s three-run first.
Corey Fehribach hit his first home run of the season in the third to cut the lead to 3-1, but the Eagles could only get two more hits until the ninth inning off of Adam Niemeyer and the Buckeyes bullpen.
Ohio State added a run in the seventh and the eighth which ultimately was the difference in the game.
Despite failing to get the game even in the ninth, the Eagles still managed to take two of three against the Buckeyes and finished off the week winners of four of five games, with a two-game sweep of No. 2 UF.
FGCU will be back on the field Wednesday, March 15, when the Eagles return to JetBlue Park to take on Florida State at 6:30 p.m.