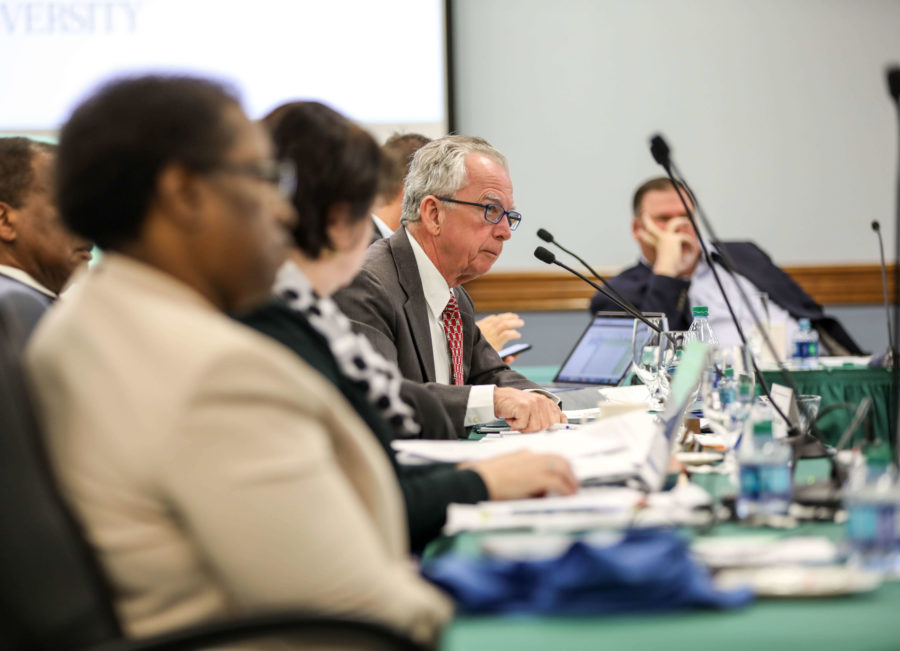 FGCU’s Board of Trustees appointed Mike Martin as the new university president in February. However, its work with him doesn’t stop there.

The contract, which was drafted on Wednesday, March 8 and is formally called the “President’s Employment Agreement with Florida Gulf Coast University,” details Martin’s duties as President Wilson Bradshaw’s successor.

Attorney Nikhil Joshi, who was hired by BOT chair Dudley Goodlette to write the contract, was present at the meeting.

Joshi stood at the podium in the front of the ballroom during the majority of the contract discussion, answering questions that trustees had and offering to make minor changes to the document.

In the contract, it is stated that Martin has “the authority to direct the operation and management of the university, subject to the direction, control, supervision and instructions of the board.”

Martin’s salary is also detailed in the document.

Starting on Saturday, July 1, Martin will receive an annual base salary of $350,000.

The trustees debated on the annual performance incentive bonus that is detailed in the contract.

In the document, it states that the board may award Martin a bonus of up to $100,000 after going over the “President Performance Evaluation Criterion,” a group of qualitative and quantitative factors that review Martin’s work prior to the end of the fiscal year. However, in the meeting, trustees discussed giving a bonus up to double the president’s salary.

Trustees debated this topic for the majority of the contract discussion.

Trustee Robbie Roepstorff suggested the Board of Governors change its ruling so the possibility of a bonus for Martin would be solely up to them; however, Goodlette disagreed. He said that, to do so, the BOG would have to change the ruling entirely, encompassing every state university in Florida.

Four amendments were made to the contract, the first stating that the BOT may consult the BOG with any bonuses higher than $350,000. It passed.

The second amendment, which said that if Martin is still employed with FGCU by July 1, 2020, his presidency is subject to reappointment by the BOG and then subject to annual reappointment. It passed.

The third amendment included clarifying language in a footnote about the BOG. It also passed.

The fourth amendment dealt with the “Governing Law” portion of the document, which stated that the contract itself “at all times, shall be interpreted, governed by, construed in accordance with and shall be in compliance with the State of Florida.”

The amendment was to add “and any and all regulations” after “State of Florida.”

Trustees couldn’t come to an agreement on the amendment and decided to go forth and vote on approving the contract as a whole without the fourth amendment. The contract was unanimously passed.

Despite the creation of his contract, Martin’s appointment must still gain the approval of the BOG during its meeting on March 29 and 30 at Florida A&M University in Tallahassee.