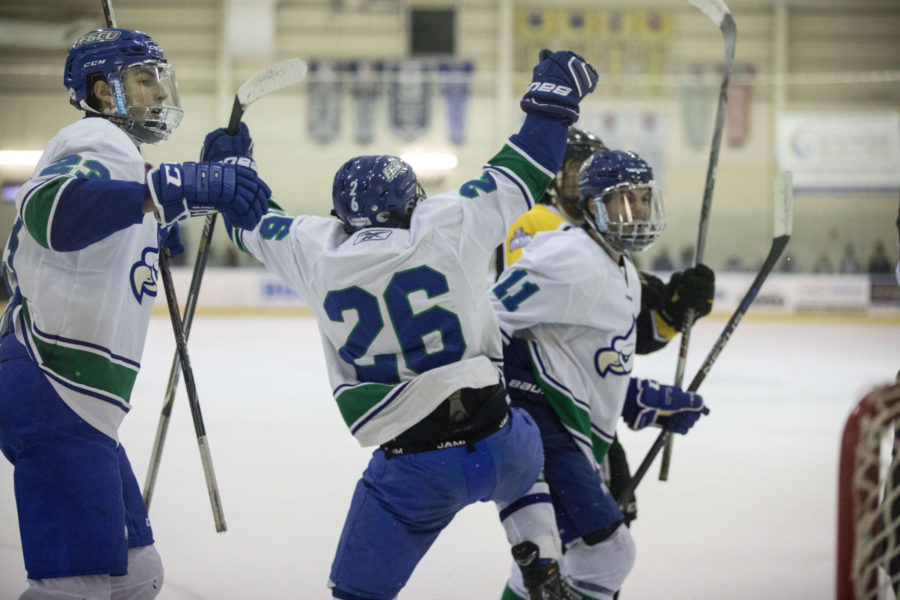 Tyler Tracy stood tall in net for the FGCU DII hockey team Wednesday afternoon, saving 25 of 27 shots to push the Eagles to their first win at Nationals this year in a 5-2 victory over Utah State.
The Eagles were able to rally back after giving up the first two goals to Utah through the first period and a half.
FGCU captain Logan Garst was able to crack the goose egg on the scoreboard with a little under four minutes left in the second period, making it a 2-1 game. Sean O’Meara would tie things up before heading into the second intermission with just 18 seconds left in the period.
Assistant captain Mike Chemello broke the tie 4:55 into the third to give the Eagles their first lead of the game.
Both Tyler Tracy and Utah State goalie Austin Willenborg were tested heavily in the third with quality scoring chances fired there way, but one goalie had to lose, and Tracy made sure it wasn’t him, coming up with multiple highlight reel saves to keep the Eagles’ one-goal lead.
Willenborg kept Utah State in the game before buckling to the Eagles’ offensive pressure when Nathan Pelligra was able to get one by late. With just under two minutes remaining, the Eagles saw a two-goal lead.
With Utah State pulling their goalie, the Eagles saw an empty net dawned at the other end of the ice, and, from behind his own goal line, Logan Garst sniped the empty cage from 200 feet out. Tyler Tracy would pick up a much-earned assist on the goal, capping off the 5-2 victory.
The Eagles are back in action at nationals on Thursday, March 16 as they take on Aurora at 1:45 p.m.