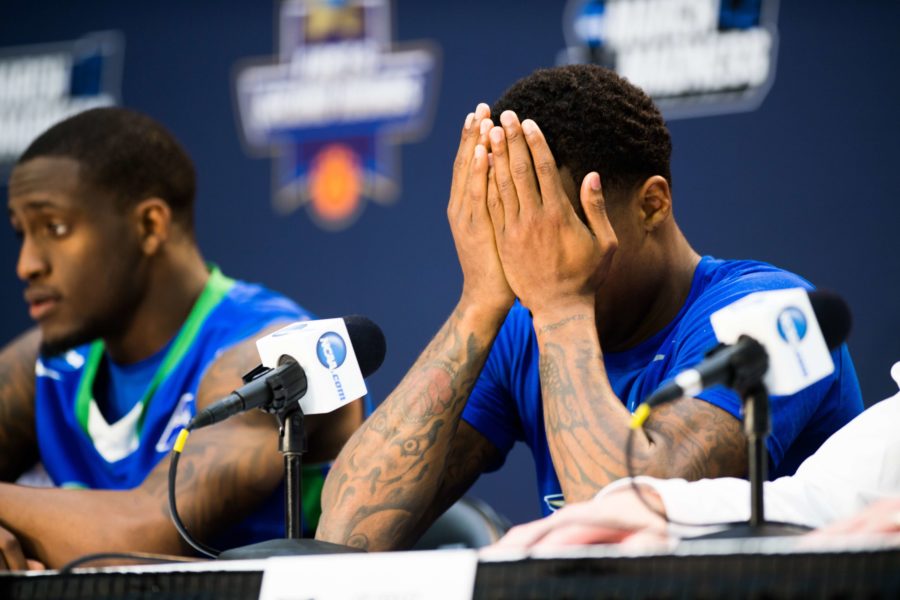 Making its third appearance in the NCAA tournament in five years, the No. 14 FGCU men’s basketball team fell to No. 3 FSU 86-80 in the First Round of the NCAA Tournament at the Amway Center in Orlando.
Cutting the Seminoles lead to just five twice in the final minute of the game, the Eagles were unable to overcome time and complete their late comeback.
“Obviously we’re disappointed that we lost,” FGCU head coach Joe Dooley said. “I don’t think it diminishes the year we had. We’re proud of our guys. We had a heck of a year. Disappointing, but hopefully something that we can build on here going forward.”
While the Seminoles enjoyed 56 percent shooting from the clip, FSU used its 6-7 average height to its advantage, ending with a 44-36 advantage in the paint and a 46-26 advantage on the boards.
All-ACC second team member Dwayne Bacon led a quartet of double-figure scorers with 25 points while Jonathan Isaac added a 17-point, 10-rebound, double-double performance.
“Bacon jumped up and made a shot, and Isaac jumped up and made a couple shots when they were well guarded,” Dooley said. “There’s a reason Isaac is projected as a top-ten pick. He’s skilled. He’s athletic.”


Leading the charge in the first NCAA Tournament game of his collegiate career, Brandon Goodwin finished with 28 points and seven assists while Zach Johnson added 17 points and five assists.
“I couldn’t be more proud of my teammates for stepping up at that stage and just battling all game,” Goodwin said. “I thought we never gave up. We always pulled each other together, and we talked to one another. So it just makes it that much sweeter next year going in with pretty much the same guys and that stuff, except for our two seniors.”
Coming into the matchup against a team that doesn’t allow many points in the paint, Joe Dooley’s game plan to have his team shoot a lot of threes didn’t pay off as the Eagles shot 29 percent from behind the arc.
Despite having some open looks down the stretch, the Eagles triples’ just wouldn’t fall, with five three-point attempts going in-and-out of the basket.
“We talked, and we said that we’re probably going to have to make eight, nine, 10, 11 threes to be in the game because they’re so big,” Dooley said.
Facing an FSU side that is the tallest team in Division I basketball, the Eagles struggled early on to connect passes, with the Seminoles’ height playing a big factor in their ability to cut off passing lanes.
Complementing their strong play on defense, the Seminoles opened up the half shooting 12-18 from the field en route to a 28-19 lead.
Struggling against an aggressive defense, the Eagles were able to overcome a nine-point deficit and ride a 10-0 run, capped off by a three-pointer by Rayjon Tucker, to take a 29-28 lead with 3:59 left go in the first.
While FGCU looked to be locked into its typical offensive rhythm, FSU didn’t back down despite going nearly five minutes without a basket, going five for their last five shots at the end of the half to take a 40-36 lead at the half.
The biggest storyline for FSU in the second half was getting to the free-throw line. With the Eagles committing 17 fouls in the second half, Terance Mann attacked the basket early and often in the second half, going 5-7 from the charity stripe.
After fouling Mann on a defensive play, Demetris Morant took a hard fall on the court and left the game with a severe ankle sprain.

Putting together another one of his signature second half performances, Johnson tried to claw the Eagles back in the game, knocking down three of his 12 second half points to bring FGCU within eight, 71-63 with 5:40 left to go.
With the game within single digits, the Eagles went on a scoring drought that seemed to put the nail in the coffin before a three by Christian Terrell brought the Eagles back within nine, 77-68 with 2:17 left to play in the second.
Despite having the game within five twice in the final minute of the game, the Eagles were unable to force turnovers and knock down shots, falling to the third-seeded Seminoles.
Out in the First Round of the NCAA Tournament for the second consecutive season, the Eagles have all but two players returning next year, Marc-Eddy Norelia and Morant, and they’re excited to have their new pieces join the team and make another at the NCAA Tournament next season.
“Michael Gilmore, Ricky Doyle, both are great guys that can replace Meech and Marc,” Goodwin said. “Today just shows that we can fight. We fought hard, and they came in second in their league, and we played with them and played hard the whole game. So I think that’s a little bit of momentum, definitely, going into next year, just having the prize right there and not being able to fully grab it. That definitely makes us a lot more hungry going into next year.”
Delete Image
Align Left
Align Center
Align Right
Align Left
Align Center
Delete Heading