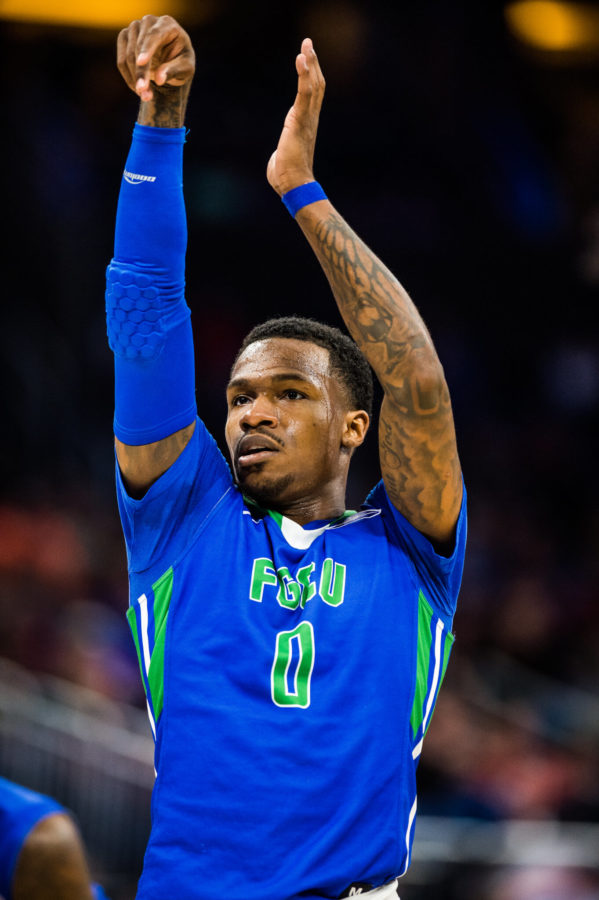 FGCU men’s basketball player Brandon Goodwin has been named to the NABC District 3 First Team along with coach Joe Dooley, who has been selected as the District 3 Coach of the Year.
District 3 includes all players and coaches from the ASUN and Big South conferences, and was voted on by coaches of the NABC.
Goodwin is the fourth player in program history to receive All-District First Team honors. Marc-Eddy Norelia earned this honor during the 2016 season.
Dooley is the first coach in program history to be named an All-District Coach.
“Brandon had one of the best, if not the best, season in program history, and it’s great to see him recognized as one of the best players for all the hard work he has put in,” said Dooley.
After sitting out last season due to redshirt regulations, the UCF transfer had a remarkable first season as an Eagle.
Setting the program’s single-season scoring record with 629 points, the guard led FGCU in scoring (18.5) and assists (4.1), and finished third in rebounding (4.5).
Goodwin was the unanimous ASUN Newcomer of the Year and was named the ASUN Newcomer of the Week six times this season.
The redshirt junior was also named the ASUN Tournament MVP after averaging 20 points over three FGCU wins.
Goodwin also came up big in the first round of the NCAA Tournament against No. 3 FSU, scoring 28 points and earning seven assists.
Dooley was recently named the ASUN Coach of the Year after guiding FGCU to a 26-8 record before being named the District 3 Coach of the Year.
With guidance from Dooley, the Eagles were able to set a D-I program record for regular-season wins with 23 and finished ASUN play 12-2 for a .857 winning percentage.
Dooley also directed FGCU to its first perfect away record in program history, going 7-0 against their ASUN competition.