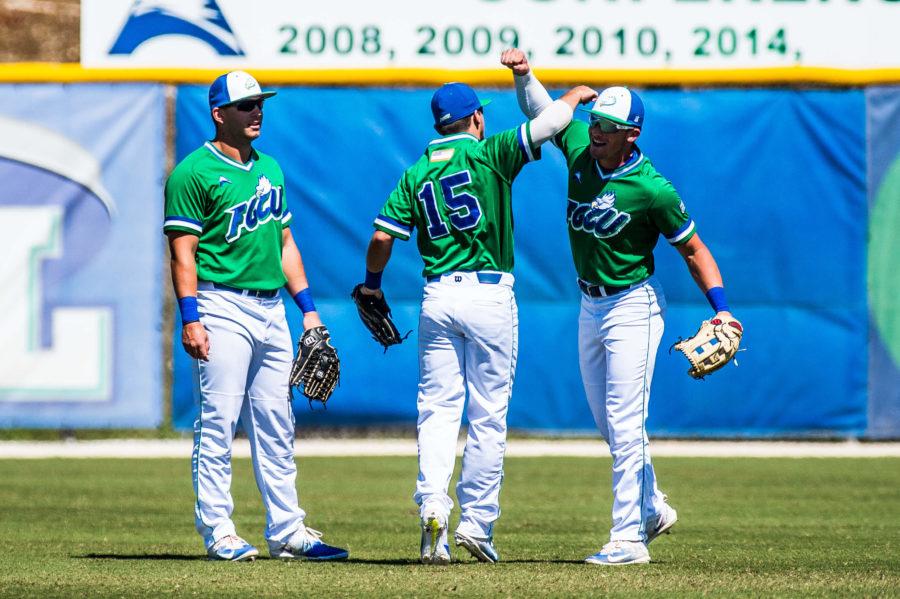 Extending its win streak to eight, the No. 12 FGCU baseball completed a three-game sweep against Jackson State with a 5-1 victory on Sunday.
Josh Dye (5-1) went seven innings, allowing one run to pick up his fifth win of the season.
“Josh Dye was outstanding today,” FGCU head coach Dave Tollett said. “Probably his best outing for us. He was in control the whole game. I felt like calling pitches was like driving a Cadillac. I mean everything I called, he put it where I wanted. He was spot on.”
Early on, it was a pitching duel between Dye and Miguel Yrigoyen as neither team was able to get on the board.
With the Tigers threatening in the top of the third, Dye worked around a leadoff double with a pop up and a strike out to strand Jarvis Warner at third base.
A scoreless game through four, the Eagles broke the goose egg on the scoreboard with three runs in the fifth. Matt Reardon knocked in the first run with an RBI double, and Julio Gonzalez singled home two to give FGCU a 3-0 lead.
For Gonzalez, those were his 22nd and 23rd RBIs this year, putting him two back of Spencer Levine for the team lead.
Gage Morey added another run in the sixth on a safety squeeze, scoring their fourth run to go up 4-0.
Dye gave up his only run in the seventh on an RBI single by Jarvis Warner but avoided further trouble to get through a new career high in innings pitches.
“When I got out there, I had command of all three of my pitches,” Dye said. “Everything felt great and was working like I wanted it to, and I just stayed and pitched to my strengths and kept them off balance.
Kenton Herring pitched a clean top of the eighth and in the bottom half, Richie Garcia hit his second home run of the season to put the Eagles up 5-1.
That run took away Sterling Koerner’s save chance, but Koerner pitched in the bottom of the ninth, retiring the Tigers’ side in order to close the game.
FGCU will be off Monday and Tuesday before they host in-state foe Miami on Wednesday night at Swanson Stadium at 6:30 p.m.
“We’re looking forward to hosting Miami,” Tollett said, “traditionally, one of the best programs in the country.” ”Been to numerous [College] World Series, and we’re excited about playing at Swanson Stadium.”