88 keys to success: The beginning of an FGCU pianist’s story 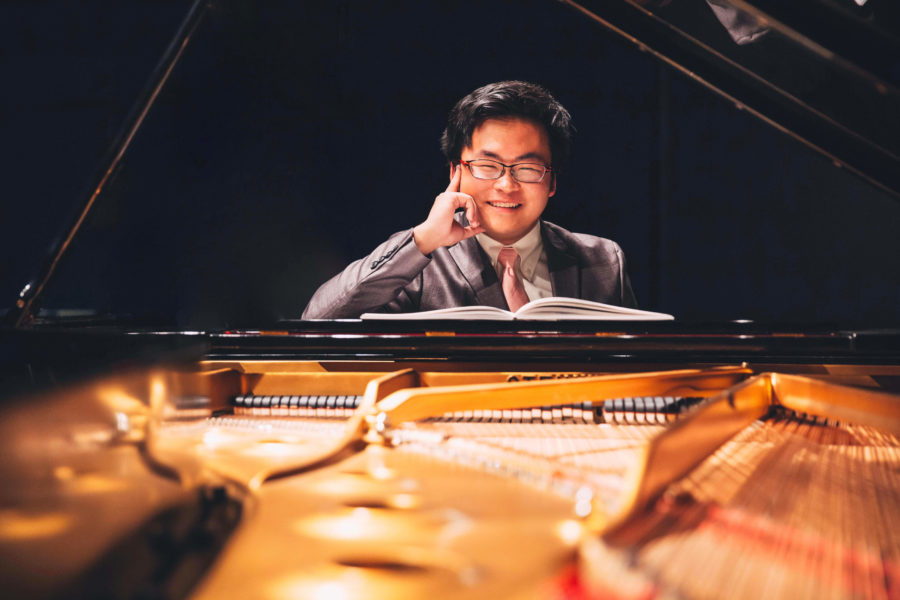 Yun Cao, an FGCU music and political science major, is gearing up for his seconnd Carengie Hall performance at the end of May. (Photo courtesy of Yun Cao)

When he was eight years old, the course of Yun Cao’s life changed forever. He and his mother immigrated to the United States, and he began playing the piano.

Though at the time, the young boy thought of piano as nothing more than an intriguing hobby, 12 years later he’s playing with FGCU’s Symphony Orchestra and has played with a myriad of other orchestras throughout his life, playing not only piano, but violin as well.

In addition to Cao’s music classes, he has honors classes and courses for his second major, political science.

For Cao, time management is key, with his schedule including rehearsals with other students as well as his own three-to-four-hour practice sessions.

“Being a pianist is like being an athlete — you have to train and improve everyday,” Cao said.

His performances make the hard work worth it, like his Carnegie Hall debut, in which he played J.S. Bach’s C-sharp minor Prelude and Fugue from the Well-Tempered Klavier Book One. And the hard work isn’t letting up anytime soon, because at the end of this May, Cao is going back to Carnegie to perform once again.

“As a performer, my job is to communicate to the audience what the composer intended to portray in the music she or he has written,” Cao said. “As a ‘messenger of music,’ I have the duty to carry on musical traditions that have been passed down to me from generation to generation. If you follow my ‘musical lineage,’ you can trace my teacher’s teacher etc. back to Beethoven himself. Music, at the end of its day, is still a form of entertainment — my job is to deliver music to the audience in its most pure and polished form.”

Cao’s taken his music from personal to professional, playing piano at fundraising concerts and other outreach events, and working at FGCU as a piano accompanist, accompanying five vocal and two instrumentalist majors.

He also frequently performs on campus with shows throughout April, leading up to his Carnegie performance.

On Sunday, March 26, Cao completed Beethoven Violin Sonata No. 6 in A major with violinist Kristen Weis at U. Tobe Recital Hall.

For the last performance in April, Cao will play ensemble music with the piano studio at the U. Tobe Recital Hall.

Through the month of May, Cao will be heavily practicing for his Carnegie performance on Friday the 26, where he’ll be performing Gabriel Faure’s Requiem on pipe organ.

Cao accredits The Bower School of Music for continuously inspiring him.

Although the school is new — this year marks it’s tenth anniversary — according to Cao, it’s still a significant, impactful institution in the world of post-secondary music education.

For Cao in particular, Dr. Michael Baron, the Myra and Van Williams Distinguished Professor of Music and head of keyboard studies, has been his mentor in and out of the classroom.

“I came to FGCU because of Dr. Baron,” Cao said. “A Steinway Artist who performs more than 40 concerts a year, he brings students to FGCU from all over the world to Bower. The piano studio has students from the U.S., Peru, South Korea, China, El Salvador and, next year, a girl from Poland. We are all inspired by Dr. Baron and wish to learn much more from him.”

As far as Cao’s future goes, he hopes to be called Dr. Cao in the not too distant future, by getting his Doctorate of Musical Arts and becoming a conductor who travels the world leading orchestras.

“Music has taught me more than what regular classrooms can. Through playing and practicing, I’ve learned self-discipline, languages, history, time management, responsibility, leadership, cooperation and patience,” Cao said. “Playing music isn’t just about getting the right notes and rhythms, but it is how can you tie the music with your own life and life around you.”