THE Big C sweeps the 2017 Leadership and Involvement Awards 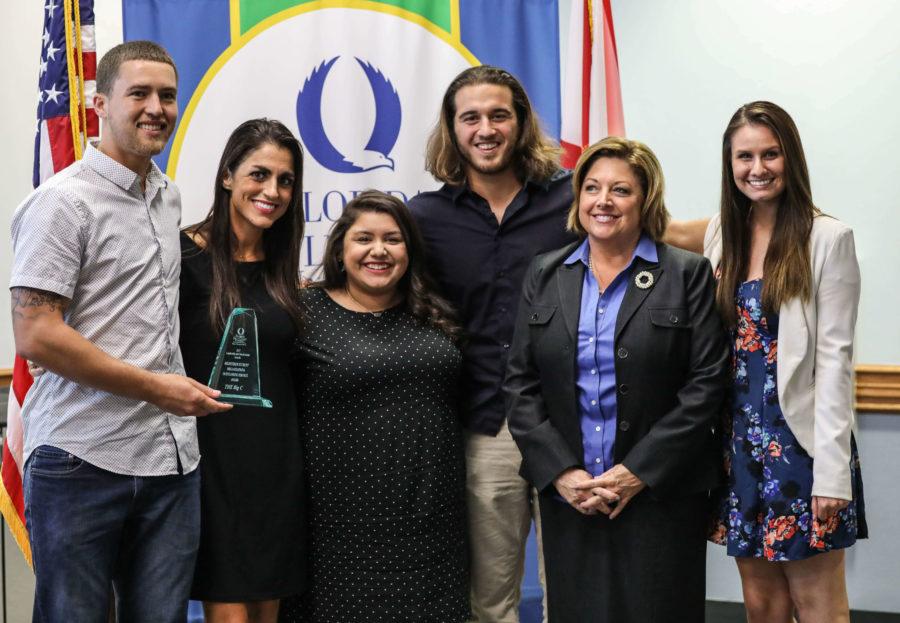 Members of THE Big C pose with Yovanovich after winning one of their five awards. (EN Photo / Kim Smith)

Many deserving students were acknowledged at the FGCU Dean of Students’ Office’s 2017 Leadership and Involvement Awards ceremony Monday, April 3, but through the 26 awards, one name, in particular, kept coming up — THE Big C.

The service-based RSO formed in September 2016 and, within a single semester, managed to tally 1,500 service-learning hours.

Because of its dedication to serving the campus and the community, the club took home the awards for the Outstanding Service and Program of the Year.

“When we succeed, we succeed in unison, and when we fail, we work together to get back up and begin pedaling again,” said Courtney Satkoski, THE Big C’s advisor. “When you serve together, you learn together.”

Satkoski, an FGCU alumna turned instructor, has presented at state, national and international conferences on the impact of service done well, has been featured on the radio and TV for her work in Africa and Southwest Florida, has received grants, awards and press for her partnerships and projects and has had her work published in a sourcebook for higher education.

“Service has shown me that by engaging your community rawly and passionately, you unearth your richest you,” Satkoski said. “I am far wealthier because I have dedicated my last 10 years to giving myself away.”

Unbeknownst to her at the time of the ceremony, members of THE Big C, led by club vice president Brandon Peterson, had nominated her for the Dr. Helen Mamarchev Distinguished Advisor of the Year award.

“I knew instantly that Brandon had nominated me because she said that the nominator wanted to ‘return home to Illinois to pursue PA school but instead, because of one person and one organization, he stayed,’” Satkoski said. “My eyes, prickly with tears, turned to Brandon, and he sweetly smiled. And, I said, ‘You nominated me?’ He just smiled, nodded his head yes and said, ‘Keep listening, we all did.’”

Peterson went on to win a Pillar of the Community award alongside the club’s director of community outreach, Austin Floyd.

“I think the most important part about last night and winning those awards wasn’t actually about winning but about the exposure that we received,” Peterson said. “We need caring, intelligent and dedicated students that will motivate and lead others to follow, just as Courtney did to each member of THE Big C this year, and that’s why it was so important for us to nominate her for such a prestigious award.”

Floyd said he was humbled to be nominated at all.

“THE Big C has lifted me to reach for goals that I never would have imagined attempting, and when I was at my all time low in school, feeling like I wanted to just stop, it really turned my last two semesters into the most enjoyable and valuable ones yet,” Floyd said.

Dean Michele Yovanovich, whose office hosts the annual Leadership and Involvement Awards, said she suspects the selection committee had a difficult time choosing the top winners from such a competitive field of applicants.

“It is a privilege to work with such engaged and bright student leaders at FGCU,” Yovanovich said. “The awards ceremony this week showcased how our Eagles excel in service and leadership.”