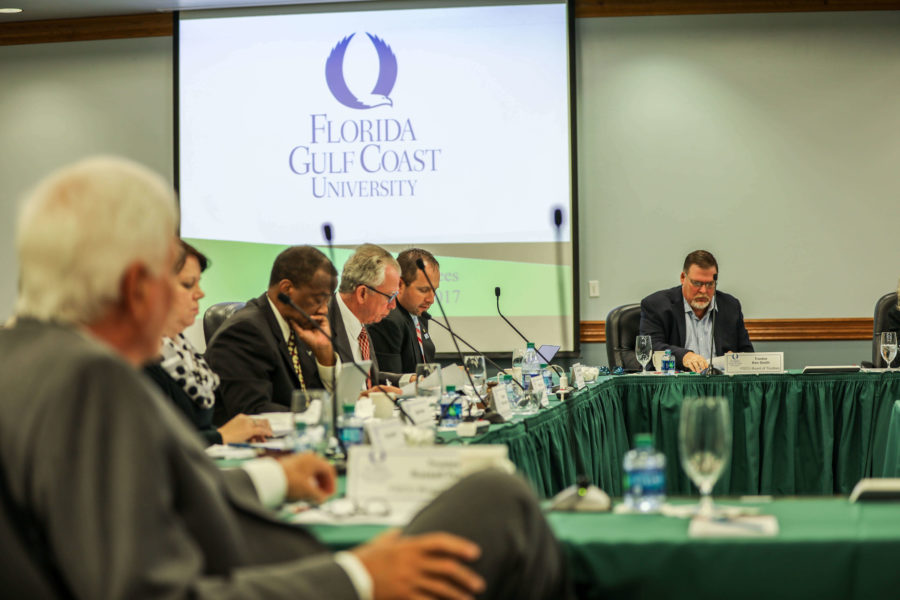 Members of the FGCU Board of Trustees held an emergency meeting on Tuesday, April 4 at 1 p.m.

There were three items on the agenda: Mike Martin’s employment agreement, an election to fill a vacancy in the BOT position of vice chair and revising board bylaws regarding Chair of Audit and Compliance Committee.

The board also touched on its recent breaking of two state laws.

The BOG’s investigation was prompted by eight allegations in total. The report contained several recommendations for the BOT moving forward.

“I think it’s important for this board to meet and to discuss those recommendations,” BOT chairman Dudley Goodlette said.

During the meeting Goodlette said that he didn’t feel like talking about the report was an emergency.

Attorney Nikhil Joshi, who was hired by Goodlette to draft Martin’s contract, spoke next.

Joshi said that trustees should be proud of the work they did choosing Martin as Bradshaw’s replacement, particularly because of the contract that was drafted and approved.

“You hit a home run with the president,” Joshi said. “And we did so pursuant to an innovative contract that is really concert [sic] with and consistent with the thoughts, the philosophy, the issues we’ve been hearing about in Tallahassee and elsewhere.”

Joshi went onto to discuss one part of the contract that was focused on “a little disproportionally” was Martin’s focus bonus.

During the meeting, Joshi showed trustees changes to the language surrounding Martin’s bonus in the contract.

Trustee Darleen Cors, who was listening to the meeting through a conference call, asked where Martin was and why he wasn’t present at the meeting.

Since Martin isn’t officially the president yet, he cannot attend BOT meetings, as he’s not a trustee.

After a back and forth discussion about Martin’s bonus, the trustees voted on the changes. The motion carried, with the single “no” made by trustee Russell Priddy.

Next, trustee Priddy proposed the motion of electing trustee Ken Smith as the vice chairman of the BOT. It carried unanimously.

With these changes made to the contract, Martin officially became FGCU’s fifth president. He will start on July 1.

Trustees will meet April 11 to discuss three action items: FGCU’s audited financial statements for the fiscal year that ended on June 30, 2016, the sixth amendment to the campus development agreement, as well as the Flint Pen Strand property.

Trustees will also discuss three action items: FGCU’s audited financial statements for the fiscal year that ended on June 30, 2016, the sixth amendment to the campus development agreement, as well as the Flint Pen Strand property.

In an earlier version of this article published in the April 5 issue of Eagle News, the article contained incorrect information about Trustee Joseph Fogg. BOT chairman Dudley Goodlette appointed Trustee Joseph Fogg as Chair of the Audit and Compliance Committee.