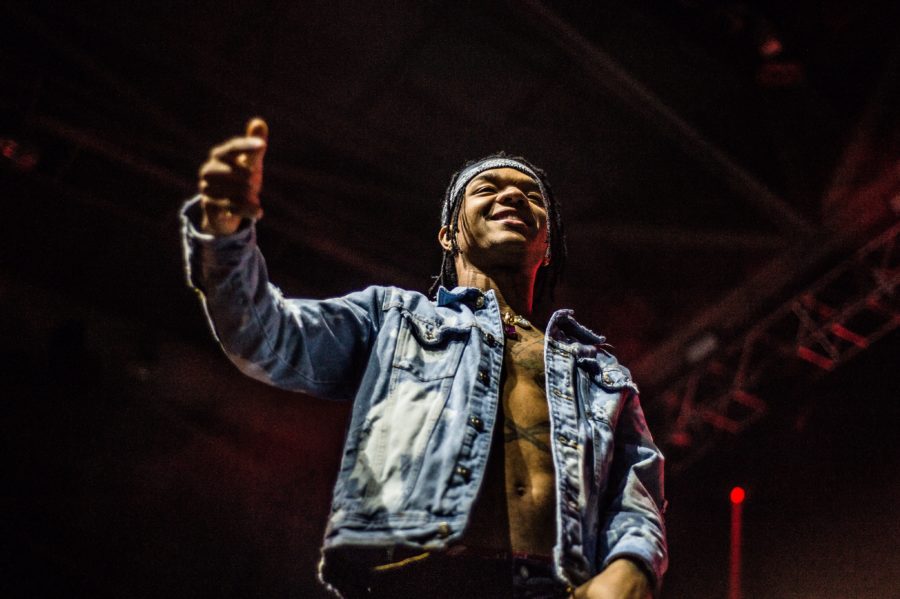 [et_pb_section admin_label=”section”][et_pb_row admin_label=”row”][et_pb_column type=”4_4″][et_pb_text admin_label=”Text”]
Hip hop duo Rae Sremmurd and artist Waka Flocka Flame performed at Nest Fest Wednesday, April 5, at Germain Arena in Fort Myers.
The crowd consisted mostly of FGCU students who had been highly anticipating the concert.
“I’m Excited to see Waka Flocka,” Sarah Ball, an Education major at FGCU, said. “He has such great energy, and his concerts are a great way to get away from reality and just have a good time.”
The venue, Germain Arena, allowed the audience to enjoy stadium seating so the audience either sit in seats or stand on the floor close to the stage for a more energetic experience.
Waka Flocka kicked off the show shortly after the 8:00 p.m. start time.
Waka Flocka immediately brought an insane amount of energy to the show. His heavy, bass-driven production tested the arena’s stereo’s capabilities. The beat of the opening song shook through each person in the crowd.
Even though he hasn’t released anything since his 2015 mixtape, “Flockaveli 1.5,” Waka Flocka Flame was still able to keep the crowd energized throughout his entire set, playing EDM instrumentals and spacing out his popular songs like “No Hands,” “Oh Let’s Do it” and “Grove St. Party.”
Flocka Flame’s crowd interaction was the major strength to his portion of the show. He constantly jumped down to crowd level. Sometimes, he would even go deep into the stadium seating and dance with the crowd while telling audiences to chug the rest of the beers.
“Since there is not a lot of people here, he has to do stuff like that to keep having an intriguing show,” Gabriel Cohen, a business management major at FGCU said. “I’m a D.J., and I do stuff like taking selfies with the fans phone’s all the time. It’s really fun for both the artist and the fans.”
The duo Rae Sremmurd came shortly after Waka Flocka to a huge roar of anticipation. They played off each other well.
With a huge catalog of songs that the FGCU crowd was familiar with, Rae Sremmurd seemed to enjoy themselves almost more than the audience. The duo continuously called the Fort Myers crowd “lit” and asked the crowd to invite them to house parties after the show.
Songs like “Look Alive,” “No Type,” “This Could Be Us” and “Black Beatles” got the crowd moving around and waving their hands in the air.
“They are so talented,” Ball said. “I really wanted to get on that stage.”
[/et_pb_text][/et_pb_column][/et_pb_row][/et_pb_section]