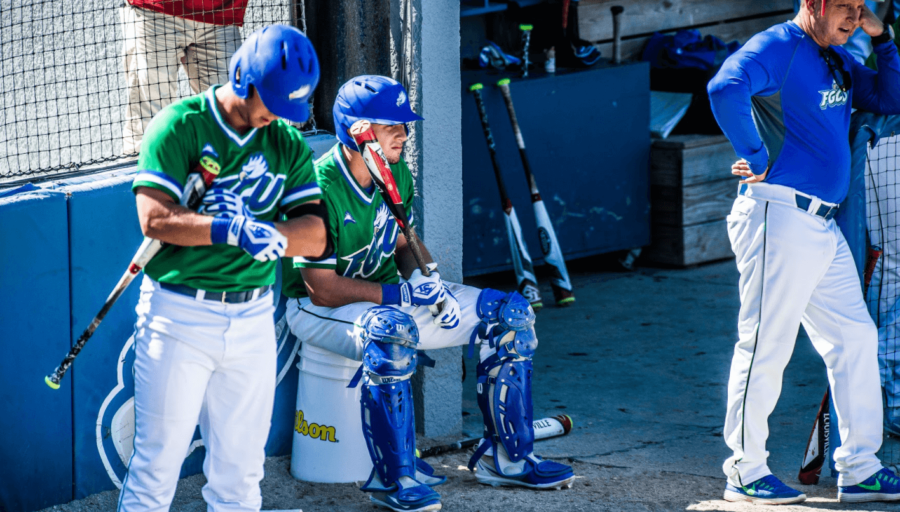 [et_pb_section admin_label=”section”]
[et_pb_row admin_label=”row”]
[et_pb_column type=”4_4″]
[et_pb_text admin_label=”Text”]
Fresh off of snapping its five-game losing streak, the No. 9 FGCU baseball team lost its third-consecutive series, falling to Stetson 1-0 on Sunday, April 9 in Deland.
Allowing the Eagles to notch just two hits, Logan Gilbert finished with 18 strikeouts which was one short of tying the Stetson record for strikeouts in a game while throwing a season-high 135 pitches on Sunday.
Gilbert had a perfect game going with two outs in the eighth before Alex Brait was hit by a pitch. He gave up his first hit to lead off the ninth on a triple by Gage Morey.
“It would’ve been a heck of a game to watch if I were on the other side,” FGCU head coach Dave Tollett said to FGCU athletics. “But no, hats off to Logan Gilbert. He threw a heck of a game and was special today. Garrett (Anderson) was great out there for us as well. Pitching was the story all weekend, and we got another old-fashioned duel today. Stetson was able to manufacture a run when they got the chance, and we weren’t. That was the difference.”
Despite being the pitcher on the short side, Anderson went eight innings, allowing one run on four hits to pick up his first loss of the season.
The first ten batters of the game were all retired via the strike out before Julio Gonzalez was the first Eagle to put the ball into play in the fourth.
Stetson scored their first run on a fielder’s choice scoring a Jorge Arenas, as the Eagles couldn’t complete the inning, ending double play to go up 1-0.
The Hatters had a chance to increase their lead in the seventh, but for the fourth time in the series, Stetson was unable to get a run in from third with less than two outs.
Gilbert entered the eighth inning with 101 pitches, and picked up strikeouts 16, 17 and 18 in the inning, but allowed his first base runner of the game on a pitch that got away from him hitting Brait on the back.
Gage Morey tripled for FGCU’s first hit in the ninth, but was caught in a rundown after Eli Lovell grounded out to third for the first out in the ninth.
Tollett put on a hit and run with pinch runner Cameron Krzemsinski, and Matt Reardon singled, setting up Gonzalez with runners on the corners with one out. With a runner in scoring position, Gonzalez lined out to the third basemen Colton Lightner who raced to the bag and beat Krzemsinski to end the game.
The Eagles will now head to Coral Gables to take on Miami on Wednesday, April 12 at 6 p.m. before heading back to Swanson Stadium to take on USC Upstate for a three-game series kicking off on Thursday, April 13.
[/et_pb_text]
[/et_pb_column]
[/et_pb_row]
[/et_pb_section]