From the Olympics to dugouts: FGCU swimmer ventures to unknown territory with softball 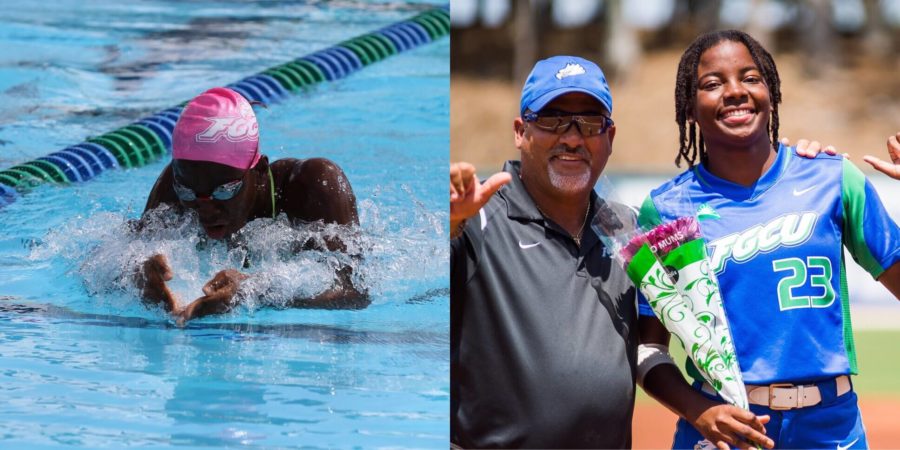 Last summer, FGCU standout swimmer, Evita Leter, was competing in the 2016 Summer Olympics to represent her country, Suriname, for swimming.

Now, the Olympic swimmer has traded her goggles and swim cap for a helmet and cleats.

After a recent drop in numbers on the FGCU softball team, Coach David Deiros reached out to all of the FGCU women sports coaches for eligible athletes to fill in as a pinch runner.

“Coach Rollins was the first one to say, ‘Why don’t you give Evita a try? She’s never played the sport before but she’s athletic, she’s smart and she can be able to do those things,’” Deiros said.

However, when the idea was brought up to the swimmer by the head coach of the FGCU swim team, Dave Rollins, Leter was a bit stunned.

“She didn’t think I was serious at first,” Rollins said. “But, in Evita fashion, she said yes. Evita is the type of person to go out of her way to help anyone and she’s a multipurpose athlete, which is what they were looking for.”

A week after saying yes, Leter’s softball career began and has only progressed over the past three weeks.

Despite having only run 125 feet so far this season, Leter has been quick to immerse herself in the team.

“It’s been a lot of learning for me because I’ve never played softball before. We don’t have softball in Suriname, so I had to learn all of the rules,” Leter said. “I’ve seen games, because we all support each other, but I’ve just never been on the field.”

Yet, the swimmer has been able to adjust fairly easily with the help of her new teammates who treat her as if she has been on the team since the beginning.

“The kids love her,” Deiros said. “The girls on the team have accepted her right away, they’ve worked with her, and have tried to teach her as well as possible.”

Yet, transitioning to a completely different sport can bring a sense of hesitation.

“Right now, I’m still a little nervous getting on the field because it’s all new, but it is a lot of fun and the team gives me a lot of confidence to get it done,” Leter said.

Competing in a fairly individualistic sport for over a decade, Leter had to learn more than just the game of softball; she also had to learn how to think in terms of the team.

“It’s a lot different than swimming,” Leter said. “Swimming is more individual and this is more team based, so in swimming it’s easy to be down on yourself about a race, but here you don’t have the opportunity to be down about anything because it’s all about the team.”

Despite starting at point zero, Leter does bring one thing from swimming her positive attitude.

As a big role model for the swim team, the swimmer’s laid back, positive attitude has allowed the transition to come easier.

“Her learning curb is pretty steep, but she approaches every time she’s out here with great enthusiasm and energy,

so it’s only a matter of time before she gets better at what she is doing and she’s already scored a run,” Deiros said.

Regardless of the steep learning curve, Leter remains optimistic, yet respectively nervous about the remaining games for the season.

“The kid has been nothing but positive to our team since she’s been here,” Deiros said. “She’s a positive person in the dugout and (she) makes us a better team.”