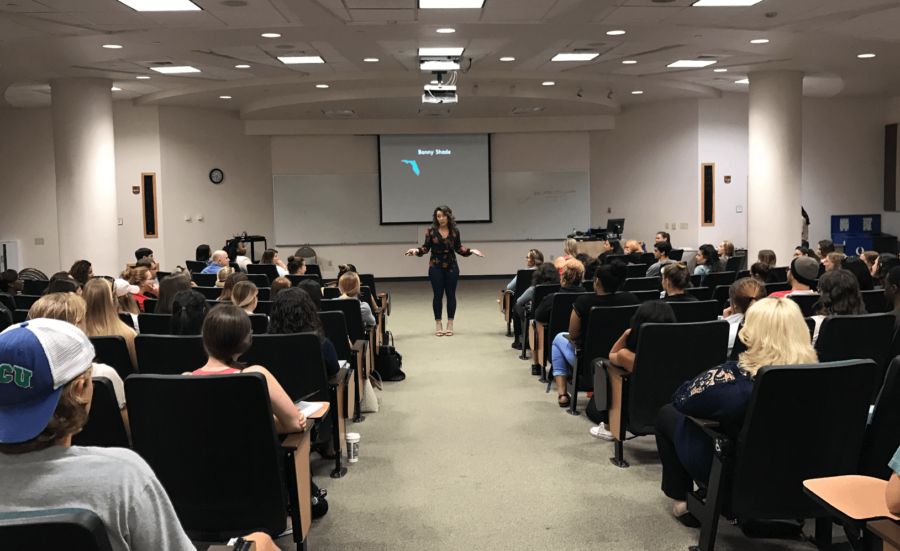 Bonny Shade, a member of the FGCU Class of 2010, lectured before a crowd of FGCU students and faculty on a topic that has been a source of intense discussion and debate on college campuses everywhere on Monday, April 10 in Edwards Hall room 112.

Shade’s lecture, entitled “Just Another Assault,” explored the stigma surrounding sexual assault and the actions that can be taken to prevent it.

Shade, who was in Zeta Tau Alpha and served as an Eagle View Orientation Leader during her time on campus, opened the lecture by asking the audience to count the number of letter Fs they could find in a sentence she displayed on the screen. The results were varied, with some finding as few as two Fs or as many as ten.

Shade used this idea to explore how victims of sexual assault often go unnoticed and whose silence can often cause sex crimes to be overlooked.

Shade hopes to shed light on victims through her lectures and through her own story of sexual assault.

After travelling back home for a weekend during her sophomore year at FGCU, Shade attended a party with some friends from her hometown. It was there that someone who she had previously considered her best friend sexually assaulted her.

“They say your body does three things in trauma: flight, fight or freeze. [I] froze. I laid there in a pool of silence…it was one of the hardest things I’ve ever had to experience in my life…I had no idea what to do…and I wasn’t really sure where to go. It’s taken me 3,136 days to stand in front of a room and say I am a survivor of rape and assault.”

One of the most powerful realizations Shade had was how her sexual assault occurred in a vastly different manner than how assault had been portrayed to her in the media.

“You expect white vans…you expect violence…but here’s what I figured out: 73 percent of victims know their assailants. 73 percent of the time it happens under our nose and we don’t even know what it looks like.”

Toward the end of her lecture, Shade looked specifically at the role of consent, using the Chipotle burrito line as an example.

“If I just went to Chipotle burrito bar and said ‘yes’ to everything, I would probably not like what I got,” Shade said. “If I said no to everything, then I would have an empty bowl and I would be hungry. But if you can go down the Chipotle burrito line and be very clear about what you want, why can you not be very clear about what you want during sex? Consent is a conversation. We have to learn how to dialogue.”

Shade explained in her lecture the role communities can play in supporting victims of sexual violence and the importance of allowing oneself to be supported by others during a time of difficulty.

“Broken pottery in Japan is often filled with gold,” Shade said in her closing remarks. “Survivors are not broken, we’re just really ready to be filled with gold. It’s time now that we know better, we do better and we start filling people with gold.”