FGCU baseball comes from behind to defeat Miami 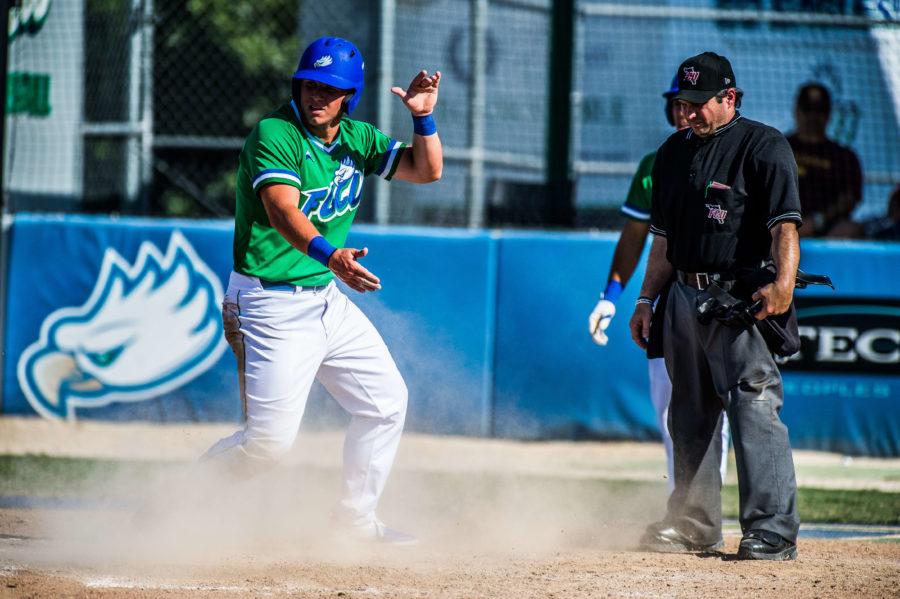 With a chance to take the season series against UM, The FGCU baseball team traveled to Coral Gables and defeated the Hurricanes 5-4.
Down 3-1 heading into the seventh, the Eagles scored three times to take a 4-3 lead with two runs coming on a missed pop up in the infield off the bat of Julio Gonzalez before the game was delayed by rain.
“It’s a huge win for our program, huge win for our university” FGCU head Coach Dave Tollett said to FGCU athletics. “We’ve been playing against them since 2008, and we never ever have been able to win a series. It’s going to be a fun bus ride home. It’s going to be a late one, but it going to be a fun one.”
Peyton Grey made the start for the Eagles and gave up two runs in just 3 2/3 innings, but behind seven relief pitchers, FGCU was able to get the win.
Miami jumped out quickly to a 1-0 lead in the first on an RBI single from Romy Gonzalez.
They doubled their lead in the second on an infield single by Jonny Ruiz with the bases loaded but Grey got Christopher Barr to fly out, limiting the damage to just one.
After two walks to start the top half of the sixth, Julio Gonzalez came up with two outs to get the Eagles on the board, cutting the Hurricanes’ lead to one.
After taking the lead in the seventh, FGCU couldn’t maintain its one-run lead after a Bart’s RBI single tied the game at four following the 45-minute rain delay.
Corey Fehribach walked to lead off the eighth and, after Marc Coffers executed a sacrifice bunt, designated-hitter Alex Brait singled home Fehribach for the go-ahead run to put FGCU on top 5-4.
Herring finished off Miami with a six-out save, securing the Eagles 26th win of the season with Parker Hamilton getting the win
The Eagles will be right back at it on Thursday, April 13 for a weekend series vs USC Upstate at Swanson Stadium, as they continue ASUN play.