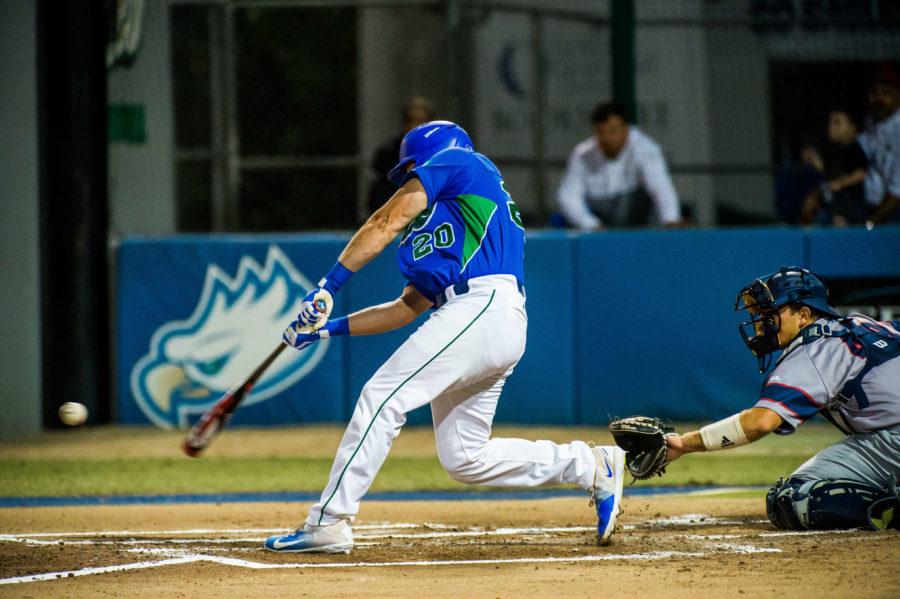 Fresh off of a victory against UM on Wednesday, The FGCU baseball team rallied from a run down in the eighth to beat USC Upstate 7-6 in the first game of a three-game series at Swanson Stadium.
With the Spartans up by one run in the bottom of the eighth, Spencer Levine, who came in as a diffusive replacement, hit the first pitch he saw for a two-run homer to put the Eagles ahead 7-6.
“I was just happy (Dave Tollett) gave me the opportunity to get into the game today,” Levine said. “I was talking to all my teammates that saw that pitcher before I did. They said he threw a lot of curve balls, and I was up there sitting on curve balls, and he threw it to me first pitch and that was it.”
Kutter Crawford took the mound for the Eagles on Thursday night in search of his sixth win of the season.
Despite leaving after six innings with a lead, Crawford got a no decision as the right-hander allowed two runs on four hits punching out eight.
After a knocking in the game win on Wednesday, Alex Brait got the Eagles going with a two-run double, scoring Richie Garcia and Corey Fehribach to give FGCU a 2-0 lead.
Crawford continued to put up zeroes, but had to deal with a little trouble in the fourth.
Brett Hawkins and Charlie Carpenter both singled to lead of the fourth, but Crawford got the next three outs with two coming from strikeouts and also picking off Hawkins at second base for the third out.
The Spartans had another threat in the fifth, and this time they were able to capitalize.
With the bases loaded for USC Upstate, Devin Ortiz grounded out, but a run was able to score cutting the lead to 2-1.
The Spartans tied the game up on a passed ball that hit catcher’s Marc Coffers shin pad which brought home Pat Raiff with the second run.
Crawford was able to keep the game even by getting Hawkins to line out sharply to shortstop Julio Gonzalez to get through the fifth.
Coffers redeemed himself by leading off with a single in the fifth and advanced to third on Brait’s second hit of the game. The next batter, Eli Lovell, skewed one to the right side, which brought Coffers home to give FGCU the lead right back.
Crawford came back out for the sixth and after a lead single by Charlie Carpenter; he got J.J. Shimko to roll over one for a 6-4-3 double play for his final outs of the game.
“If you look at his numbers, they’re pretty good,” FGCU head coach Dave Tollett said. “I mean, eight (strikeouts). He got into a little trouble in the fourth, but he’s been lights out for us. I’ve coached Chris Sale. Chris Sale has had an inning where he threw like that. We still believe he’s our guy, and he’ll be out there again next Friday.”
FGCU added to their lead in the sixth after the first two batters reached, setting up runners on first and third for Garcia who roped an RBI single through the hole to go up 4-2. It quickly became 5-2 when Julio Gonzalez scored on a wild pitch.
After a lead-off walk by Ryan Ahern in relief, Tollett wasted no time getting Sterling Koerner closer into the game in the seventh. However, RBI hits from Ortiz and Hawkins brought USC Upstate within one.
Entering the eighth inning with a lead, the Eagles made some defensive switches with Spencer Levine coming into the game to catch and Cameron Krzeminski came in for Eli Lovell.
Those changes didn’t initially work as J.J. Shimko flew one to left, but Krzeminski had it go off his glove and Shimko was at second to lead off the eighth.
The Spartans came through with two infield RBI singles by Russ Schwertferger and Pat Raiff to give the Spartans their first lead of the night.
Once again the Eagles got those runs right back and Kenton Herring, pitching on back-to-back days, came in to get the save capped off with a Richie Garcia bare-hand play at third to get the final out.
The Eagles will now take on the Spartans for game two of the series when they face off on Friday, April 14 at 6:30 p.m. at Swanson Stadium.