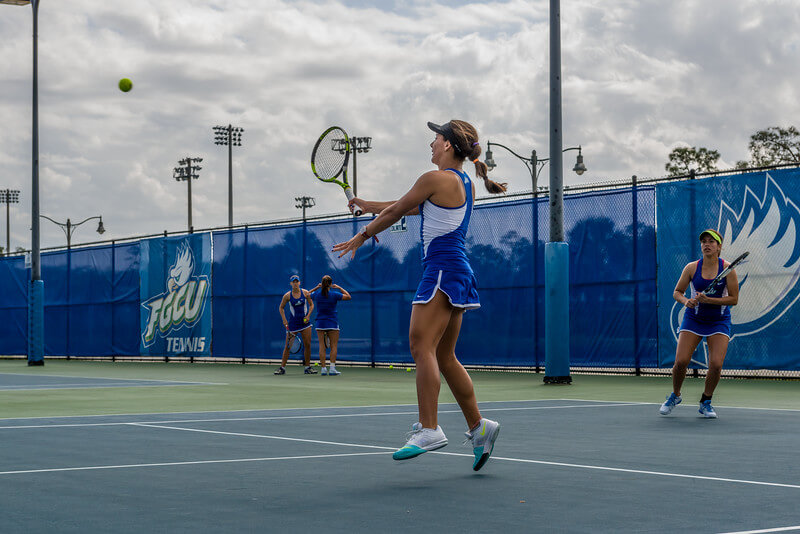 The FGCU women’s tennis team defeated UNF 4-3 in its regular-season finale at the FGCU Tennis Complex to claim the program’s first-ever ASUN regular-season championship.
In a match that lasted over three hours on Saturday afternoon, Laura Falceto Font came back after dropping the first set and outlasted UNF’s Quetzali Vazquez to claim the regular-season crown for the Eagles.
“The girls did amazing today,” FGCU head coach Courtney Vernon said to FGCU athletics. “They showed a lot of fight; they showed a lot of heart, and they were able to get the job done in the big moments. It was just really exciting. UNF fought until the last point, and we prepared for that kind of fight so the girls were ready to take the match today because that’s what they had to do.”
With a chance to claim the program’s first regular-season title, the Eagles jumped out to an early lead thanks to a come-from-behind doubles victory by Breana Stampfli and Maja Ornberg.
Before dropping the final doubles match of the day, the Eagles claimed the doubles victory with the top tandem of Julia Ascua and Julianna Curtis claiming their 10th win of the season with a 6-4 victory over Luise Intert and Vazquez.
Sparking one of the Eagles’ three-singles wins, Stampfli defeated Gomez 6-4 in the first set and 6-1 in the second.
Following Stampfli’s victory, Ascua gave FGCU a 3-0 lead, defeating Irina Karangozishvili 7-6 in the first set and 6-0 in the second.
After the Eagles jumped out to a 3-0 lead in singles play, the Ospreys strung together back-to-back matches to bring themselves within one.
After Intert and Gartner defeated Kelly and Bridget Forster respectively, Ornberg came one point short of the win before Font outlasted Vazquez to bring home the title.
The Eagles will now host the ASUN Tennis Championships from April 21 to April 23 at the FGCU Tennis Complex. As the top seed, the Eagles will face the winner of No. 4 Stetson and No. 5 Lipscomb in the semifinal on Saturday.