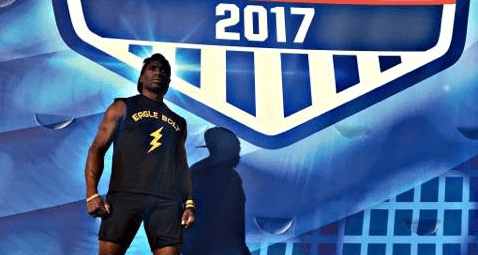 Senior criminal justice major Jordan Brown stood in line for 15 days, camping out with 21 others, for a chance to make it on NBC’s “American Ninja Warrior.”

After waiting for 360 hours in front of the Daytona International Speedway, he found out that he would be competing on the show on Monday, April 3.

“It was an amazing experience of being able to get to know people,” Brown, who is commonly known as “The Flash” on campus, said.

“American Ninja Warrior” is a sports entertainment competition show that features contestants running through a series of obstacle courses.

ANW applicants must be at least 21 years old, must fill out a 20-page application as well as make a video about themselves.

There was 70,000 people applied for the show during its eighth season.

After reviewing applications, producers of the show pick 100 applicants from each region of the country to compete on the show.

Brown wasn’t included in the initial 100. He then decided to become a “walk-on,” and wait for a chance to run through the preliminary course live in front of cameras and announcers.

“We all worked out together, we hung out throughout the whole day,” Brown said.

Brown went on the show as a “walk-on” last year as well, but only made it to the second obstacle course.

During the 15 days Brown camped out, he and his newfound friends would practice for the course every day and take group photos detailing their journey.

“It was totally worth it with those guys,” Brown said. “If I don’t get the call to compete next year, I will do it again.”

While Brown is often seen training at the Veteran’s Pavilion on campus, he also trains at a gym called Extreme Air Gymnastics, where he runs through practice courses.

“It’s been really fun,” Brown said. “It’s helped me prepare for the show.”

According to Brown, ANW just finished filming participants running through the preliminary course in his region and will now film in Canada. After that, they’re going to film the final competition.

Qualifying and final courses are filmed back-to-back usually over the course of two days. The top 15 qualifiers from each city finals course will then compete in Las Vegas for the final competition called Mount Midoriyama.

The final competition consists of four stages, each containing obstacles. If the participants make it to the final stage, they must climb up a 75-foot rope climb in under 30 seconds.

Brown knows if he has made it to the next round of the competition, but he can’t reveal that until the show airs on Monday, June 12.

Brown is looking forward to seeing the friends he made while waiting in Daytona compete.

“I’m looking forward to seeing the walk-ons that I competed with do great,” Brown said.

As for Brown, he both does and does not want to see himself compete on the show come June 12.

“I’m not really hoping to see myself,” Brown said. “I mean, I do hope I can see myself, then again it’s very unlikely because there’s just so many people that are on the show. The producers don’t show everybody.”