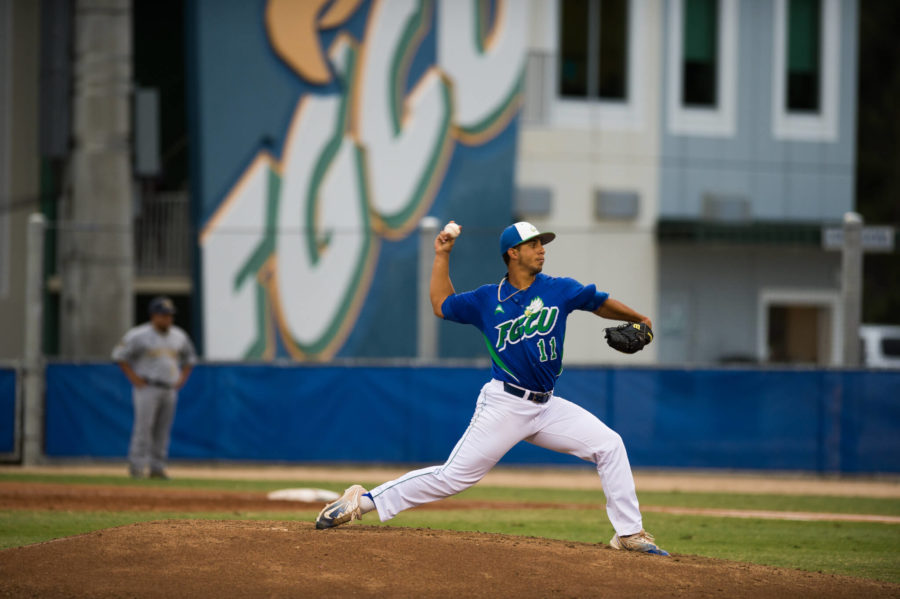 In their second-to-last home series of the year, the FGCU baseball team claimed its first ASUN series win on Saturday, defeating USC Upstate on April 14 and 15 at Swanson Stadium.
“It’s big anytime you get a series win; it’s huge,” Nick Rivera said. “Definitely for the locker room for our guys to get confidence going into FIU on Tuesday and then getting back into the conference vs. North Florida. We feel we’ve been playing real bad as an offense, letting our pitchers down.”
On Friday, the Eagles fell behind early 1-0 behind Josh Dye, as the Eagles weren’t able to complete an inning ending double play.
Up 2-0 entering the seventh inning, Russ Schwertfeger added one in the ninth on an opposite field home run, his first of two home runs in the series, to give the Spartans a 3-0 lead.
Despite getting the tying-run to the plate, the Eagles couldn’t complete the rally and dropped their fifth game in conference play.
In the series finale on Saturday, Garrett Anderson continued his strong string of starts, going five and two thirds innings, allowing two runs both coming off the bat of Schwertfeger.
The game was scoreless heading into the third inning but with two men on, Nick Rivera hit his eighth home run of the season and the 34th home run of his career to give FGCU a 1-0 lead.
Leading 4-2 in the bottom of the sixth, FGCU scored three runs but quickly gave those runs right back in the next half inning.
After the Spartans added one more run in the eighth to trail 7-4, USC Upstate committed three errors as the Eagles tacked on four more runs and went on to win 11-5.
Kenton Herring, who replaced Koerner as the closer, finished off the game out of the bullpen and notched his fourth save of the year.
“It’s big whenever you can get a series win,” Herring said. “Everybody plays us tough. Anytime you can get a series win, it’s big for morale. We’ve been scuffling a little bit, and we’re playing for a spot in the tournament right now. We got to keep it rolling next week and keep winning series again.”
The Eagles will now welcome FIU to Swanson Stadium on Tuesday before heading to Miami to take on Miami on Wednesday.